I have been away for a long time.  Writing Part 2 for our February Jamaica trip was too difficult.  There are more pictures.  There is a beautiful painting by a dear cousin that I wanted to frame, and gush over.  There were stories, projects, a wonderful wheel I never expected to buy, and then there was the magic of Stringtopia at the end of April.  Still, I couldn’t write any of these things.  It felt like a cheap gloss over what’s really been the matter.  Before I can return to the happy posts, I guess I needed to say something real.  As Jamaican Revivalists would say, light a candle, sing a sankey (psalm) and find my way back home.

I am tired tonight.  It’s honestly been a long haul.  Before I say why, I’d like to say what brought me to the keyboard any at all tonight.  It’s two people:  Morgaine Wilder of Carolina Homespun, and my friend Mary.  I was too tired to keep lace knitting, and came up to dig in my yarn & patterns.  In this tired state that soon led to digging in magazines.  Somehow for the 1st time, I picked up the Summer 2008 Wild Fibers magazine that Mary handed to me with about 3 others.  I saw Morgaine’s name, and flipped right to the article on page 32, “Off the Cuff with Morgaine.”

Until Stringtopia, I had no glimmer of who she is.  Her set-up was sheer magic – the spindles alone were all I could concentrate on.  It was her presence, and later our conversation over dinner that left me with the very firm opinion that she is a kindred spirit.  Let me go snag what I know has to be a quintessential picture of her from after that Sunday night dinner: 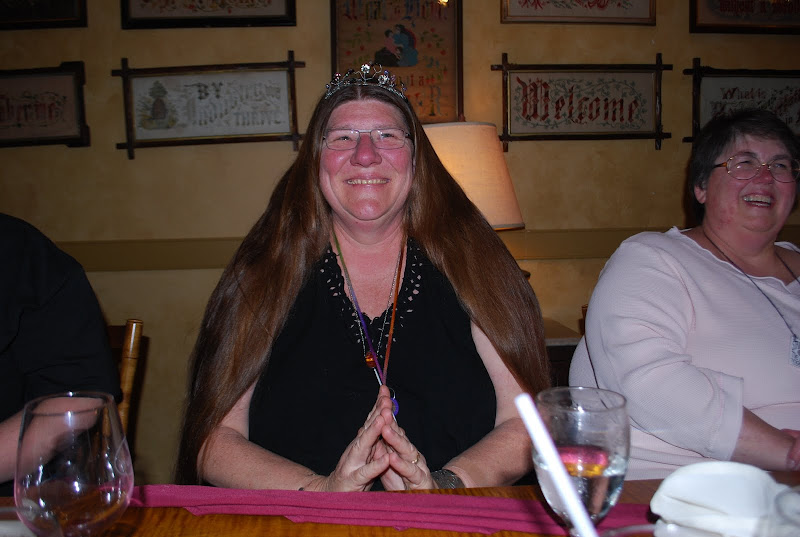 The whole article took me back to our conversation, and then hearing her voice, I read about where I have been these past months.  She gave this answer about the healing power of working with fibers:

… there is also a process called EMDR (eye movement desensitization and reprocessing).  EMDR requires focusing on a specific task using both sides of our body along with both eyes in a way that subsequently helps to reprogram how our brains deal with trauma.  Our brain locks in traumatic experiences.  At the end of the day we usually process most things in our sleep – but trauma gets encapsulated.  It’s those “trauma capsules” that create flashbacks triggered by certain sights, sounds or smells.  EMDR helps push those events into a different area of the brain and allows them to be processed rather than encapsulated… – engaging our hearts and minds and memories all at the same time.

I have been processing some difficult family drama things.  I just needed time, and left that Part 1 post hanging.  Left the non-essential people hanging.  Worked (badly for a bit).  In this frame of mind, I decided to sign-up for Stringtopia.  That involved a drive of some 8.5 hours to Lebanon, Ohio!  Anything called planning scares the life out of me PLUS this crowd from Ravelry…  But I am no fool & I could plainly see that this is how badly I wanted to go: 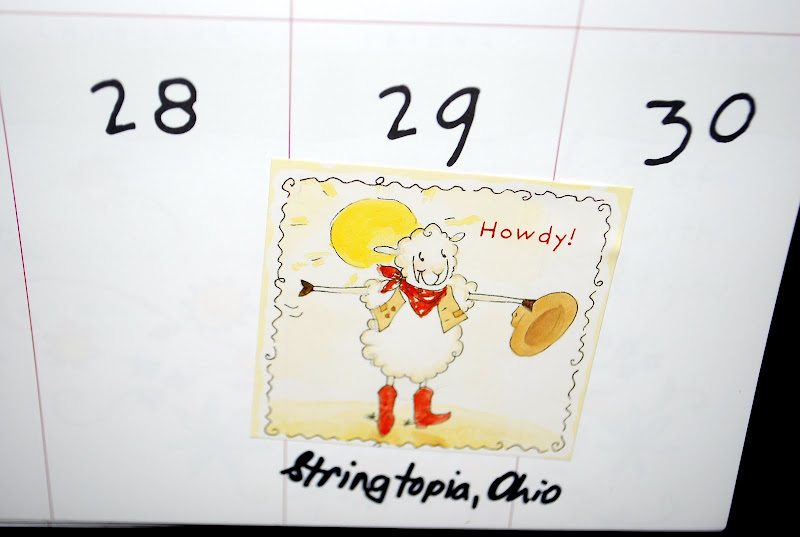 I found exactly what Morgaine described 3 years ago in this interview – a fibre community that feels safe.  I found that, and friendships, and amazing instruction from Jacey Boggs, Insubordiknit herself.  So finally, with Morgaine’s help in putting all of this to words, I can post these.  Basically all about processing those encapsulated memories.

So, it all happened at The Golden Lamb Hotel in Lebanon. 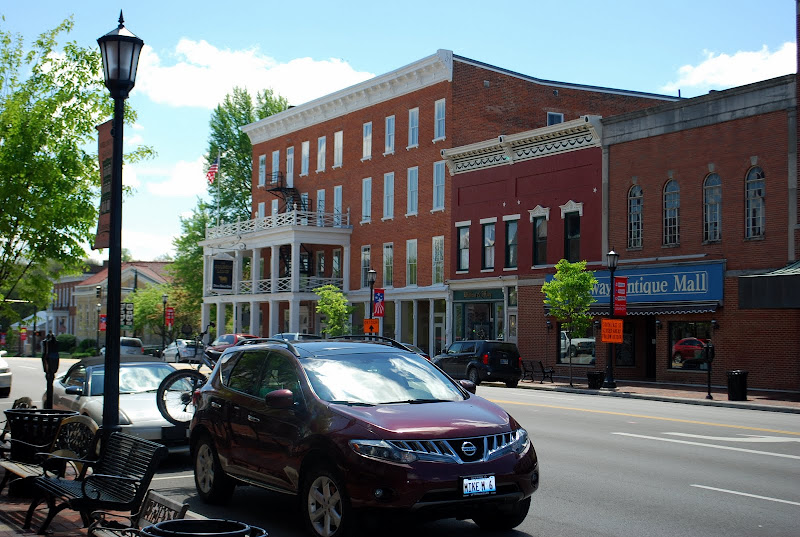 The townspeople were very warm (if a little baffled by the people who make string…).  Just a bit of what charmed the life out of me – correct fibre tools on display! 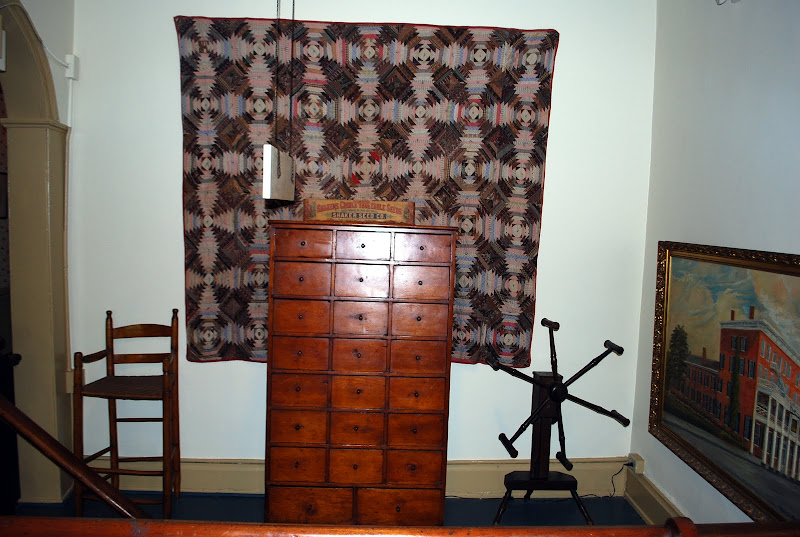 And the Registration Table in a quiet moment. 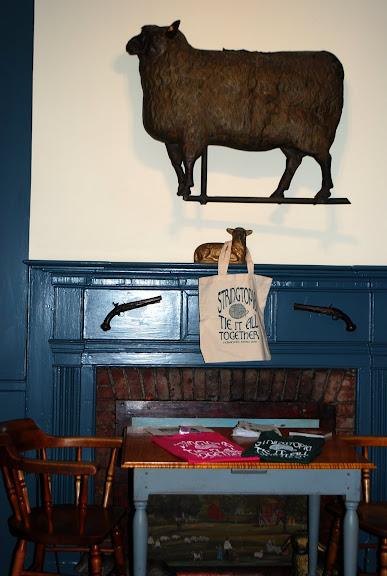 Abby and Shelly put together amazing totes with a ton of goodies.  The ½oz Llama bag actually got me to squeal in front of the very strangers I was afraid of.  Brilliant!

Hugging Sandi because I actually won her door prize the hand-beaded tiara, North Star!  Sandi drove down with us (2 perfect strangers as she put it), and inside of an hour we were all getting along famously.  It was mostly all said under the Cone of Silence but suffice it to say that Ms. Wiseheart is no longer That Sandi but this friend: 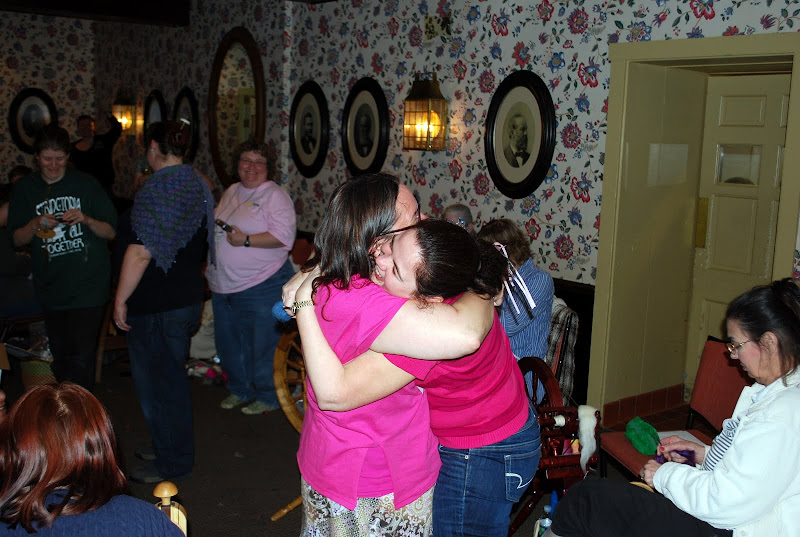 After this, it only came off for bed!  There is nothing like a Wise Sparrow tiara for dealing with the encapsulated crap – seriously.  And me a tom boy! 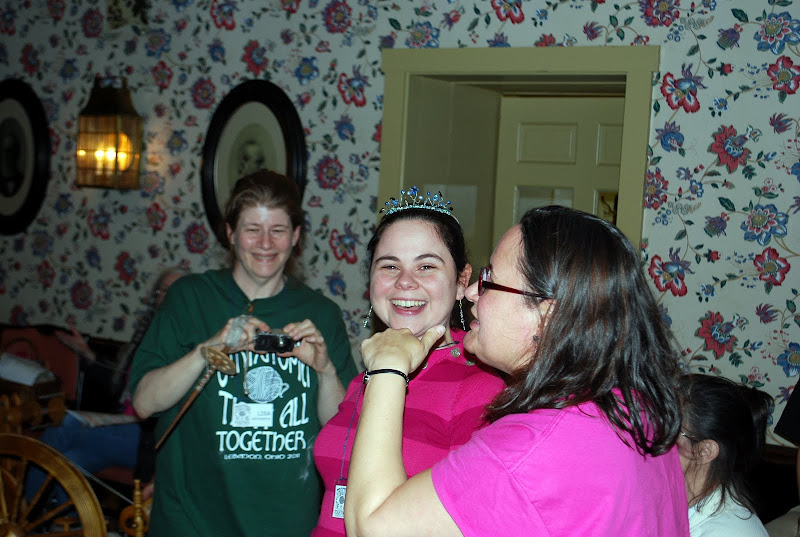 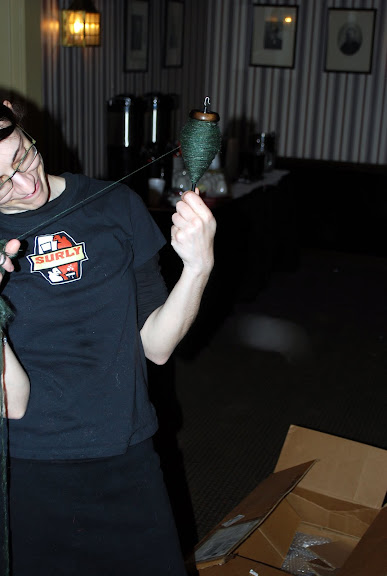 … she had mad skillz with the Stout too! 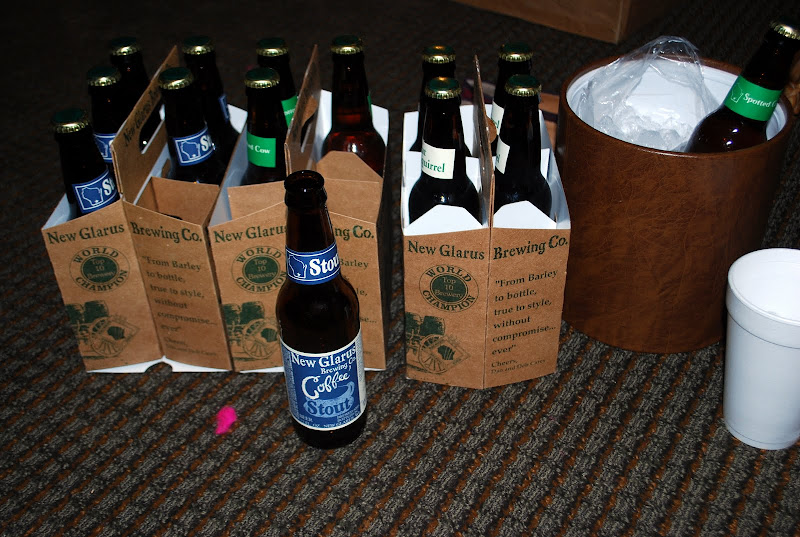 Sandi bestowed another tiara on Knitwit for her birthday – see the smiles? 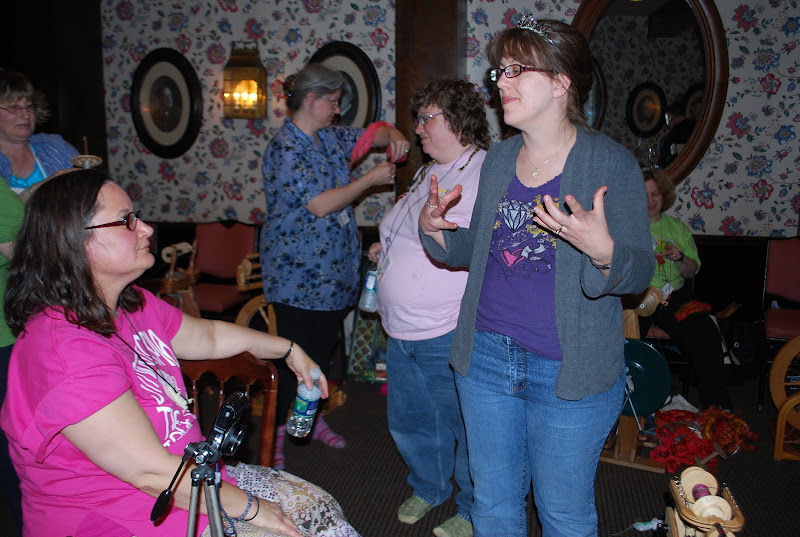 Jacey’s classes on Hard Core spinning were amazing.  I went in half-expecting major frustration, and shame (and tears) but it was so much fun it was ridiculous.  She managed not only this nervous ninny but also 2 completely new spinners.  Here’s Jacey in her element: 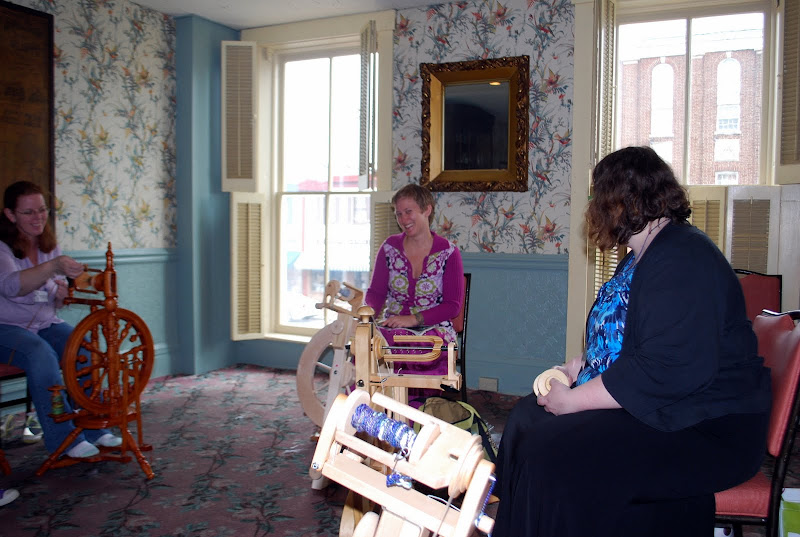 If you are like me & have doubts about (not art but…) textured yarn spinning, you should go to Jacey’s class.  It was challenging but all presented in the way we already think.  You are making sound yarn that makes the indie dyed fibres sing.  It’s not breaking rules, it’s using everything at your disposal & rocking the rules. 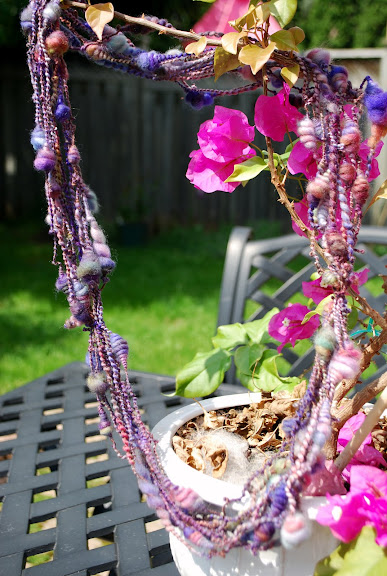 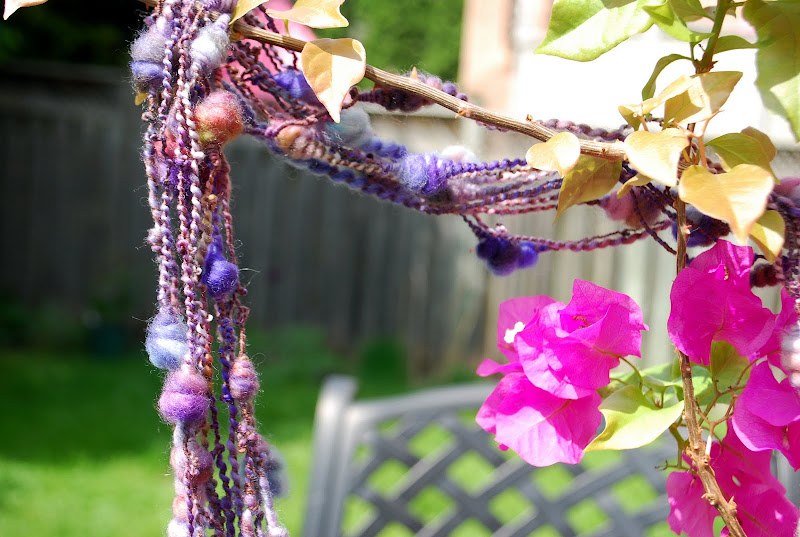 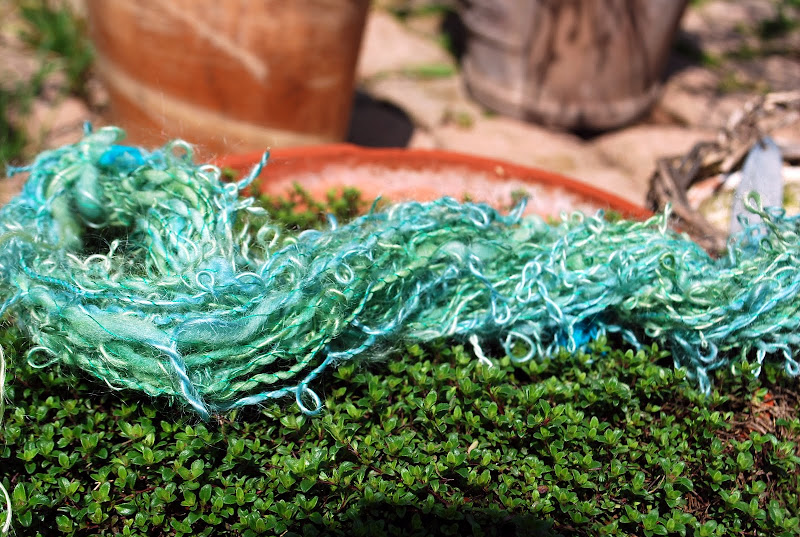 Jacey and Abby were kidding around at lunch (and in general). 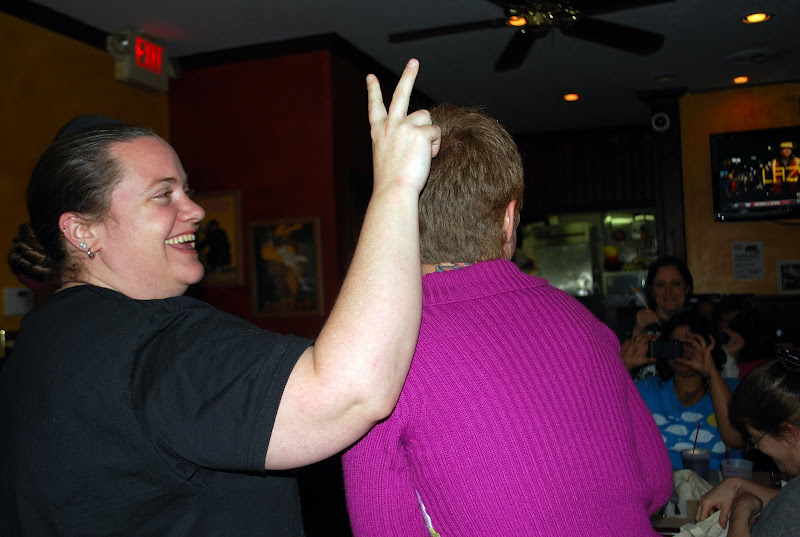 And Abby.  She was amazing, and here she is showing us what I had been pestering her about all weekend – plying on the go.  She also showed me how to ply from the pinned ball, which was a huge A-HA! moment. 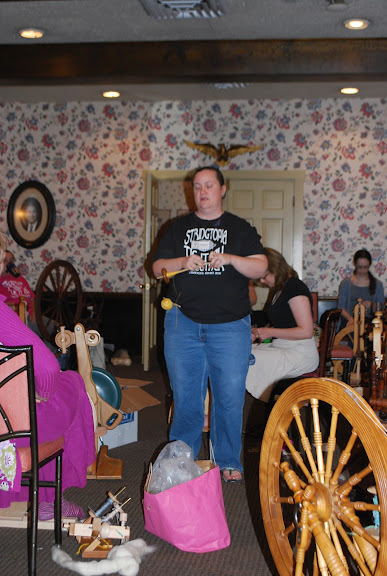 The person who put me instantly at ease was Shelly.  She made the whole signing-up process lovely, and worked extremely hard with Abby to make Stringtopia happen.  And when I walked up to the Registration table on the Friday?  Shelly jumped up & gave me a big hug as soon as I gave her my name.  I was so happy that she let me show her how to spin in the spare moments & she’s a natural! 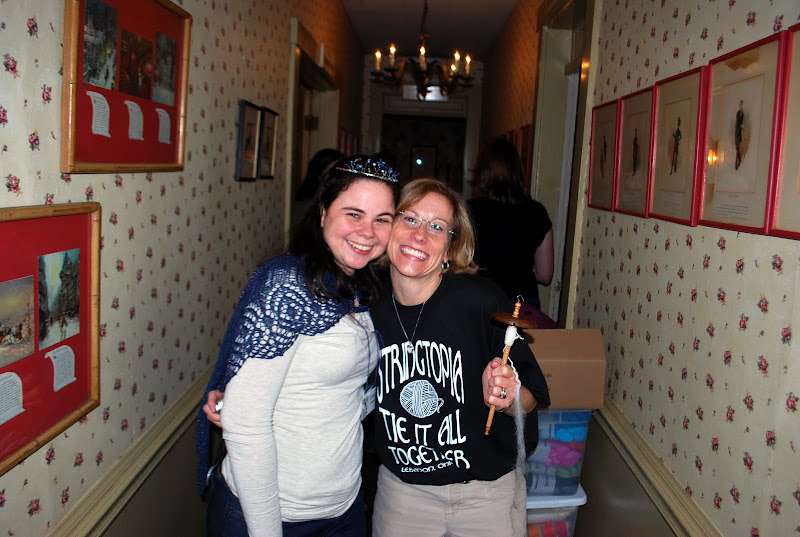 But you definitely should not go to Stringtopia.  It was awful.