Pallashanin:  I am gathering; I am picking up, making or creating the design

On Monday night, the Burlington Handweavers & Spinners Guild auctioned textiles from the private collection of Barbara Reid (1925 – 2012).  My spinning friend & inveterate enabler, Nancy, sent me the auction information months ago.  She had a hunch that I might be interested.

Um, yes!  The guild preview screamed Above-Average-for-the-‘burbs…  We are talking a weaver’s collection of objects on travels to Asia, Eastern Europe & South America.

Nancy had me at Turkish distaff.  Let alone the Andean weaving both large and small.  A girl can hope, can’t she?

A girl can also read.  Just about everything I know about Andean weaving is from these Nilda Callanaupa Alvarez books, and conversations with Abby Franquemont.

In just 2 months, I will take Abby’s full-day backstrap weaving class at the Spring String Thing.

It’s simple.  I want to learn pallay: harvest, pick up, collect.  This post explains why one would.  And as I understand things, I really do not want to be called waylaka.

Cutting to the Chase

This beautiful puka (red) poncho now lives with us.  It was my last bid of the night.

It hit me that the bidding was low enough for me to enter.  A single thought drove me:

This poncho is not going for a song.  Not tonight.  The market value is what the market pays tonight.

Dealers stayed out but a BHSG weaver was in big time.  We looked evenly at each other, and my bids came without blinking.  Another guild member marveled, “She really wants it.”  Yes, I did.

What is the provenance?  The auction catalogue says the poncho was woven in “Chincero, Peru.”  It goes on to state:

That raises a conflict.  Lake Titicaca is in Puno province.  Chinchero is a district in the province of Urubamba, Peru.

The designs or pallayninkuna will speak for themselves.  I think that they were woven using the pata pallay technique, also called pebble weave.  It would be complementary warp – the back is reverse colours.

The above design is based on facing puma claws motif.  The centre green & gold motif looks like tanka ch’oro – shells side-by-side.  The weaver also incorporated birds into the puma claws pallayshin.

In “Weaving in the Peruvian Highlands“, 2007 Nilda says that pata pallay has typically been found in Pitumarca & the Urubamba cordillera.  The animal pata pallay dominate the design.  Does this point away from Puno & Lake Titicaca?  I would love to hear your thoughts.

Using both of Nilda’s books, I have identified these pictoral motifs with variations (in no grand order):

In “Textile Traditions of Chinchero“, Nilda classes many of these animal pallay as using the supplementary warp technique.  Although it comes from the Urubamba mountain communities, Chinchero region weavers have also incorporated them (see, p. 127, 130).  After receiving a weaving with the horse pallay from her father in the 1970s, Nilda introduced the technique to her area.

I love this textile.  The sheer accomplishment of having spun, dyed and woven this for the man who wore this humbles me.  As Nilda quotes Lucio Ylla in “Weaving in the Peruvian Highlands,”:

Through their clothes and weavings, we can tell where the people come from who travel to our community.  We can identify them immediately, and many times we even know the purpose of their visit.

What I do know is that in 1988 when Peruvian weavers feared the loss of their traditional textiles, Barbara Reid brought this wool-not-synthetic, red poncho to Canada.  It may be a bridge from an older striped puka poncho or from an area that used a riot of animal designs.  Either way, it is woven with care and skill. 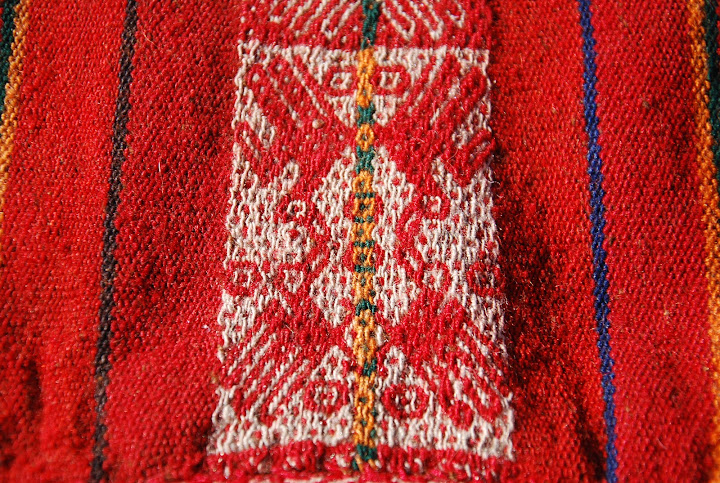 It’s a piece that brings not only warmth or beauty.  As I look hard, and re-read, I can feel myself lifted on those woven wings, and inspired to strive by the puma claws. 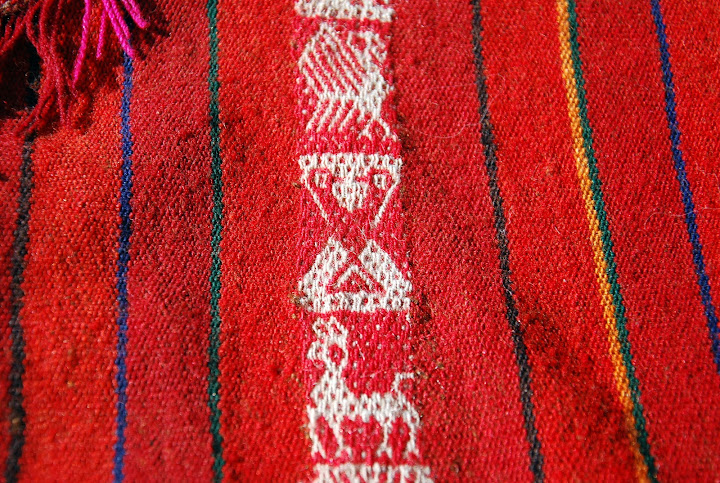 What were the first bids of the night, you ask?

To my early amazement, the guild auctioned both Turkish distaves as one lot.

Mine was the 1st & only bid!  They will aid & abet my flax spinning goal.  Just last weekend, I spun this dyed tow flax on the small antique wheel. 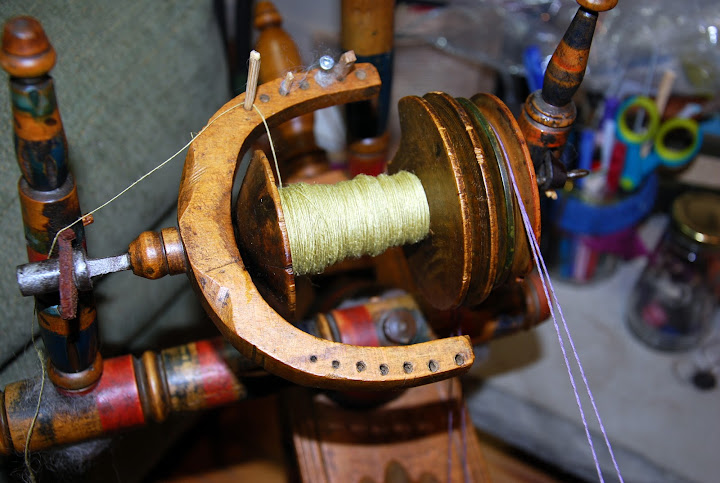 An insane amount of flax strick is also making its way to our house… maybe. 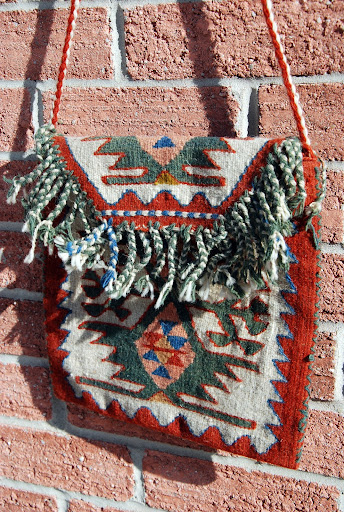 A kilim bag from Turkey’s Euphrates Basin area.  Not my best purchase ever but what’s a little guard hair to a spinner like me?

Such an interesting piece!  The weaver of this band varied the condor motif for both open and closed beaks.  I am not sure what the alternating design represents but the centre eye varies.

The last two were also a paired lot. 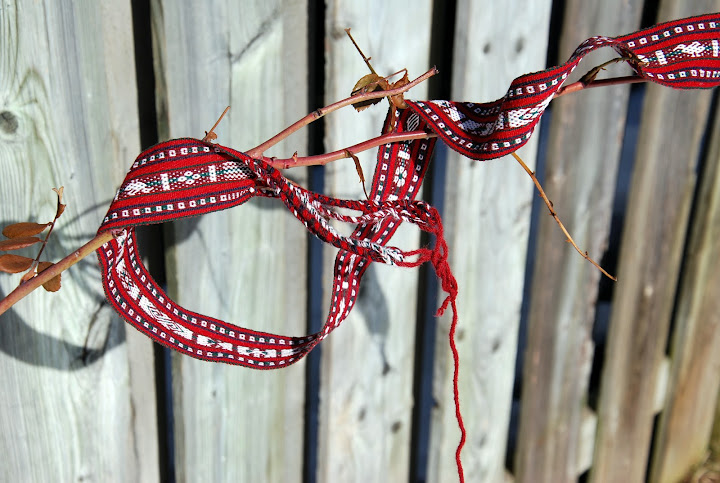 Forgive the pose, please.  Winter picture-taking was wearing thin with me…  This thin Andean chumpi or belt is as light as a ribbon.

My shadow box now sports an Andean hair comb, woven with reeds.  The catalogue listed it as being from the “jungle area east of Andes.” 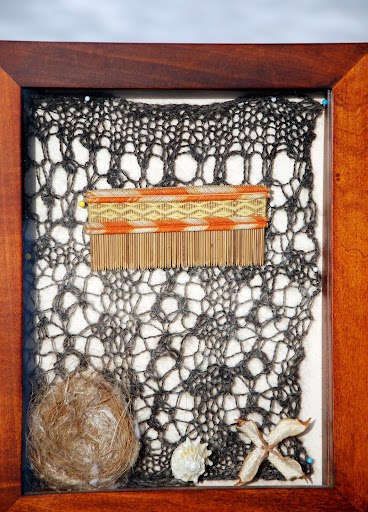 Each of these textiles, and the many I saw but dared not bid on has lifted my spirits.  The Burlington guild put on a great auction.  It was a real tribute to their friend, Barbara Reid.

Someone please tell Toby that it’s in an effort to save the eye from the ravages of his own paw, and we love him.  Thank you.