This story happened on one of those rare summery fall days, September 5, 2013.  Life runs far more smoothly now that I, daughter of Jamaica, have learned to never take fair weather for granted in the northern hemisphere.  “Make hay while the sun shines” seriously resonates here. 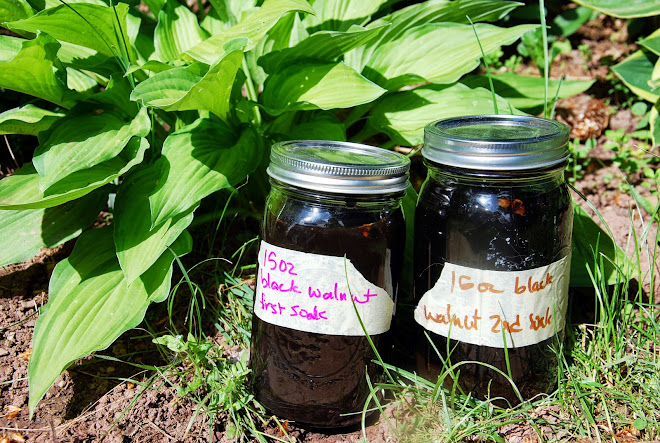 When September 5th spoke, I listened.  It said, “Grab Evil Michelle’s Black Walnut from this June, and have at it!”

Natural dyeing is not for everyone, I know.  As Sasha (thecraftyrabbit) put it on Saturday at the Woodstock Fleece Festival, “It’s too much like cooking!”  YES!  And we laughed.  N’s take is that I really did not get enough science in school.  They are both correct. 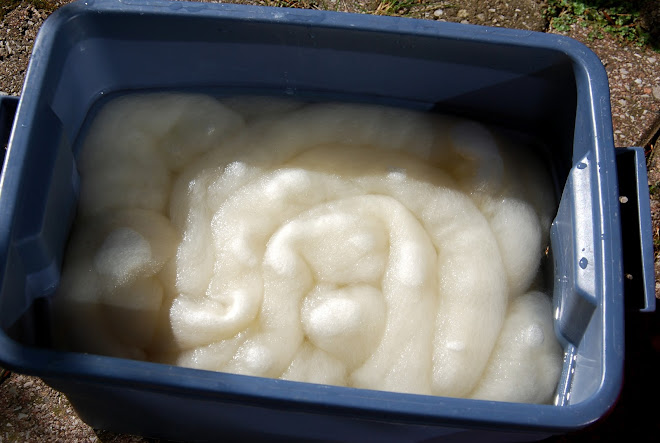 Taking the jar on the left, i.e. 15 oz of “first soak,” I appraised mine stash.  Turns out, I had lots of candidates to get in on this half of the Black Walnut gift. 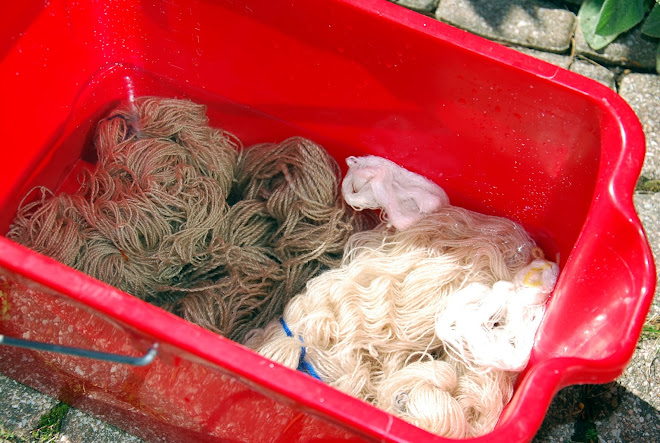 Handspun, not to be left out of dye day

It was a carefully weighed plan.  The dry weight of fibre totaled 15 oz to equal the glorious Black Walnut dye.  L→R we had variety: flax/wool blend; a silk hankie’s worth and; wool/mohair/alpaca blend handspun yarns.  They all soaked in water for an hour. 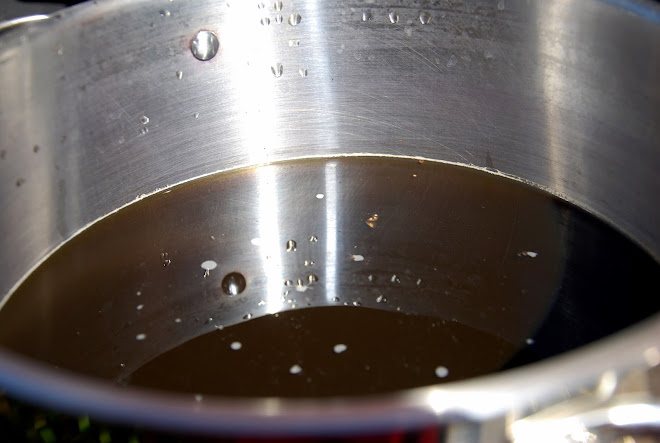 It’s true that the (so not) Evil Michelle let me sail past the messy part of preparing the husks.  Still, I heeded the words of Elizabeth Fahey in the Fall 2010 issue of Spin-Off:

…As we handle the fresh nuts and husks, our hands are stained dark brown and our fingernails are black.  The substantive dye in the black walnut husk is ready to ooze out and stain anything it touches.  This is the dye that is my delight…

Between the family wedding, and my formica counters, I decided the best plan was to dye outdoors for once.  The aha! moment was when I realized the gas BBQ was my heat source! 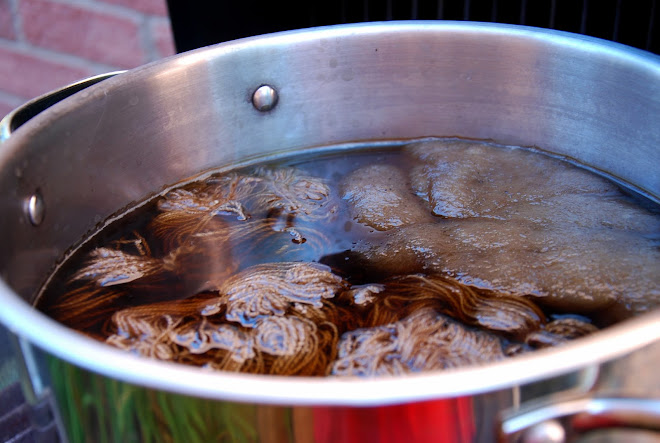 Walnut dye magic in the making

Now, my patience has its limits.  I needed something else to do outside while heating, dyeing and cooling was under way.  That’s how I came to:

Add value to an eBay Purchase 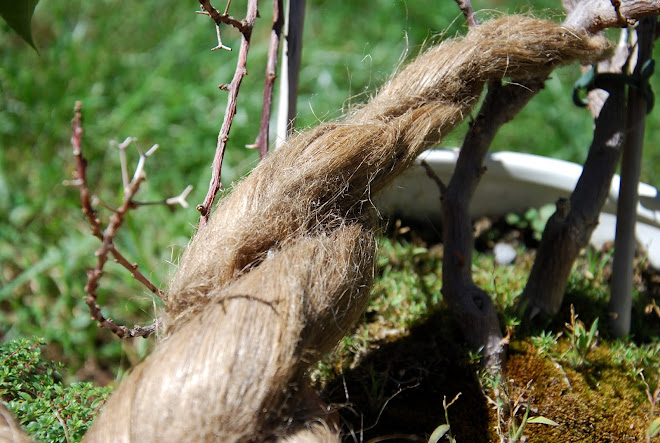 Naturally, my ears perked up when Harriet Boon demonstrated how you improve on flax this June at the Ontario Handspinning Seminar.  Putting not-great flax through a hackle helps immensely. Traditional processing involves 6 – 10 passes between finer & then finer hackles (The Intentional Spinner, p. 14).  Did the Pennsylvanian farm have access to so much equipment before this flax got bundled and hung in an attic? 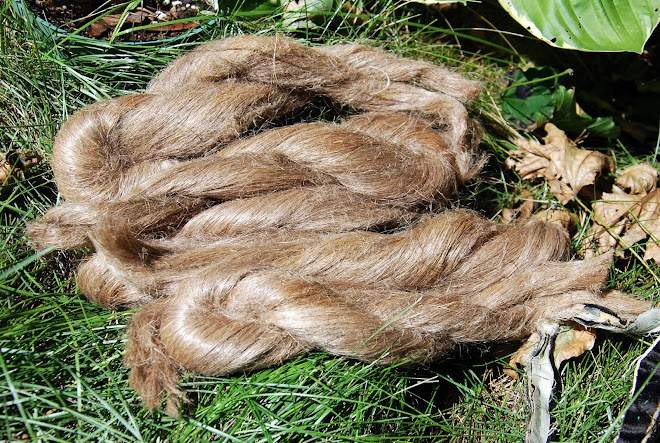 I came away from the Seminar understanding better than before these 2 important principles:

It was worth a try – this flax had not been through industrial equipment, and took a huge amount of labour over time to be produced.  Plus, my Forsyth fine stationary comb looks a lot like a hackle. 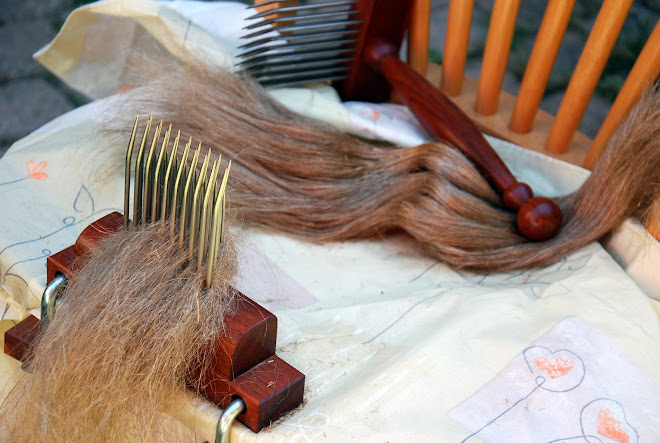 Warning:  don’t use a kitchen chair with any array of sharp, stainless steel tines.  Really.  That would be unsafe.  I don’t recommend it at all – ever.

The how:  I lashed each bundle of flax by hand, and pulled through the tines.  The moving comb is just pinning that bundle down. 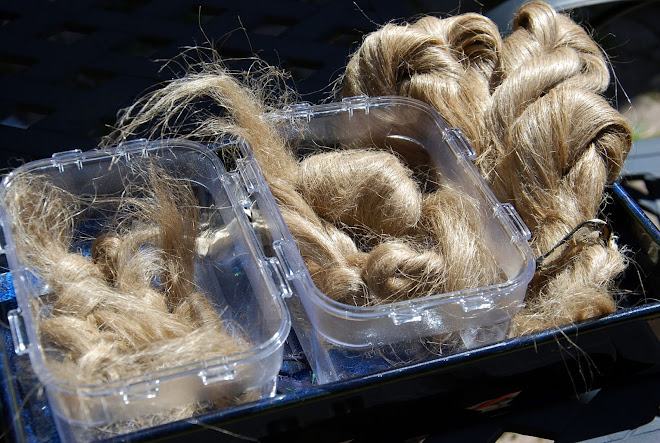 What happened was stunning.  Each of 3 passes sent chaff, dust, and brittle pieces of stem flying.  The fibres literally lightened and shone.  The first pass gave the longest fibres, and yielded 4.9 oz/ 127g.  The second pass gave 18 g, and the third 12g.  Tow that didn’t fly away was 27 g, and I kept that too. 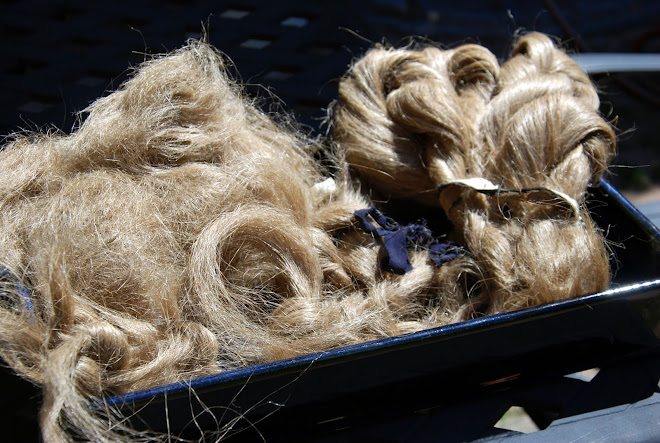 Grades of line flax with tow after re-hackling

The Black Walnut dyeing was so fantastic that I decided to finally tackle the onion skins next.  I soaked 160g of skins overnight.  The 50 g of handspun merino, and 31g Tussah silk top got alum & cream of tartar mordant overnight as well. 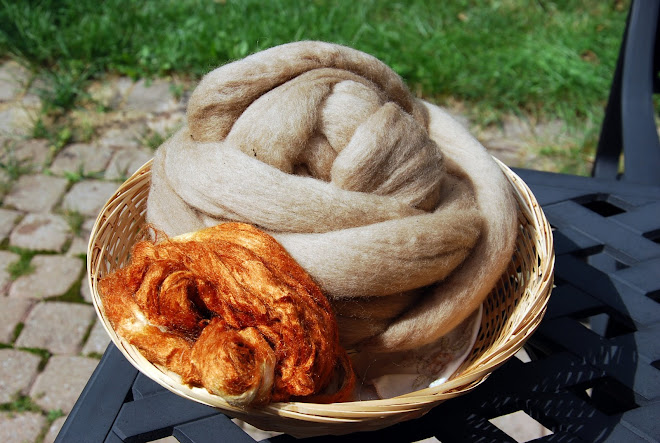 The onion skins gave a surprisingly vibrant colour but spots of the silk top resisted the dye in its bundle. 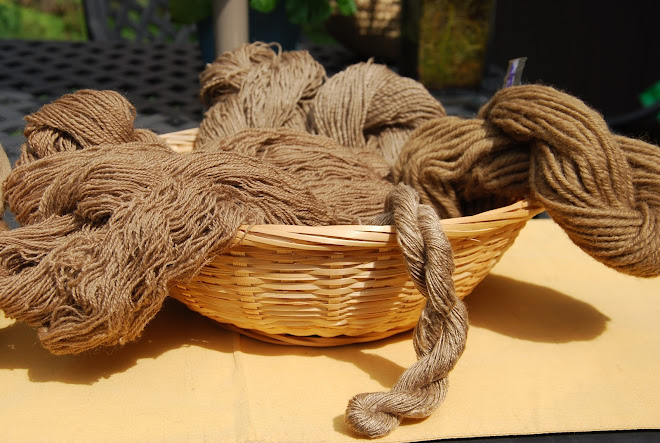 The Horned Dorset skein (right, overhang) was 48g dry.  I dyed it a few days later in the exhaust bath. 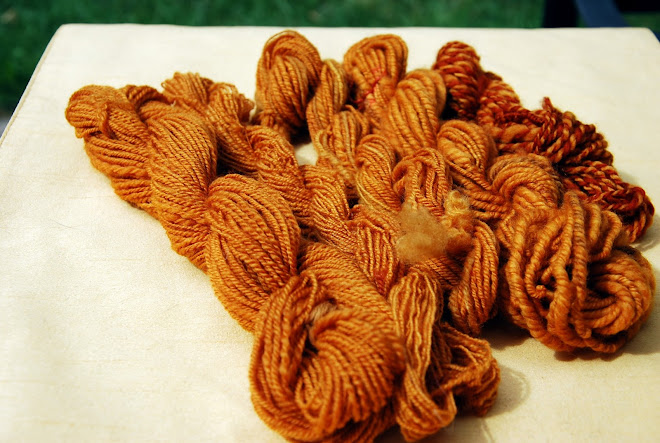 This was my first time dyeing commercially prepared fibre.  The Tussah silk top looks a bit compacted but should be spinnable. 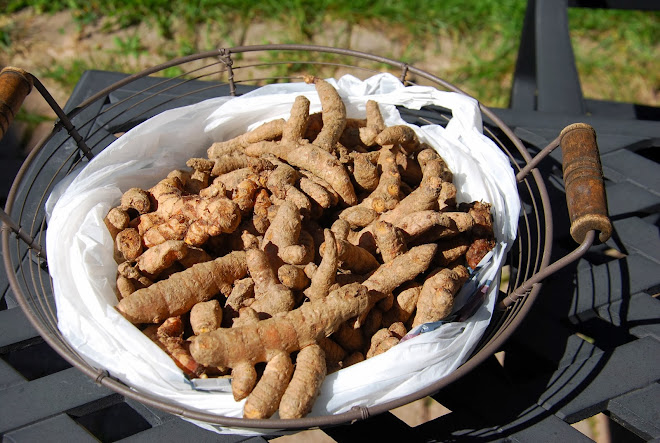 Dad brought me this bag of lovely yellow ginger.  As long ago as August 2012, I worked with a small amount of this dye with really strong results. 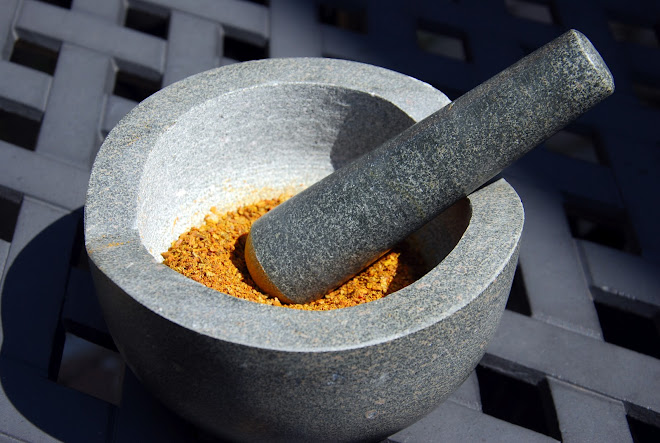 It is first cured by boiling, dried for a week, chopped and then ground – a lot of work!  I got a granite mortar & pestle from a local Home Goods store. 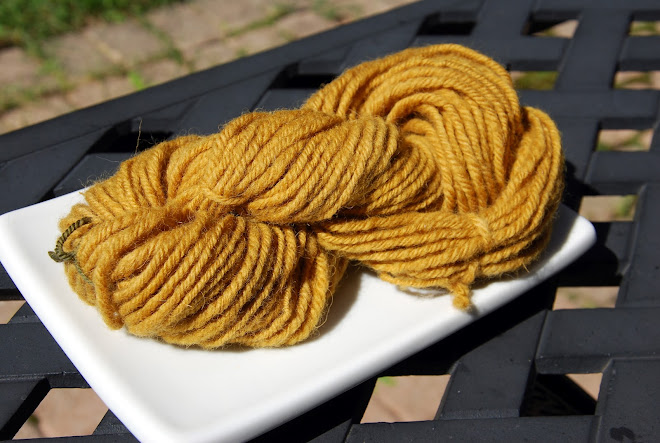 The Horned Dorset yarns are slowly making their way into a colourwork project!  I started the dye process this Monday by curing the new batch of Jamaican Yellow Ginger. 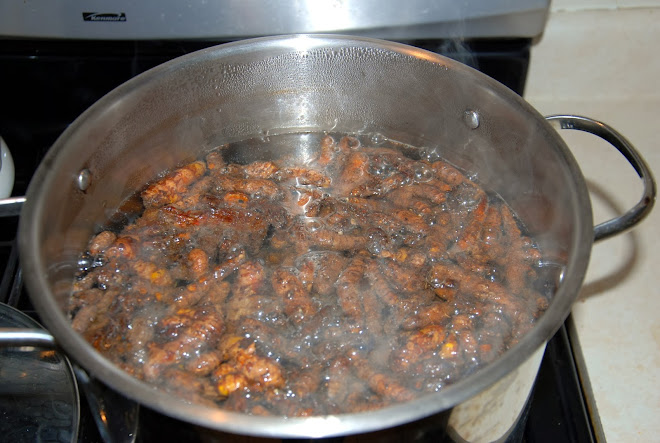 The roots are so fragrant.  Sasha’s right:  this is like cooking.  I am learning how to build the flavour of my yarn in different ways, that’s all. 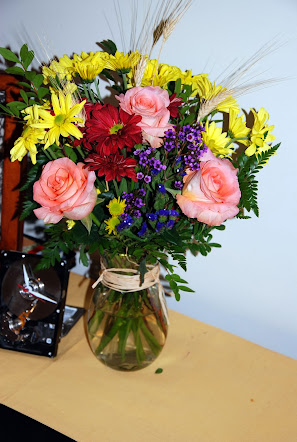 A quick post before we get ready for a family celebration on the other side of the GTA.  These are a few of my favorite work and home things that I am grateful for, today. 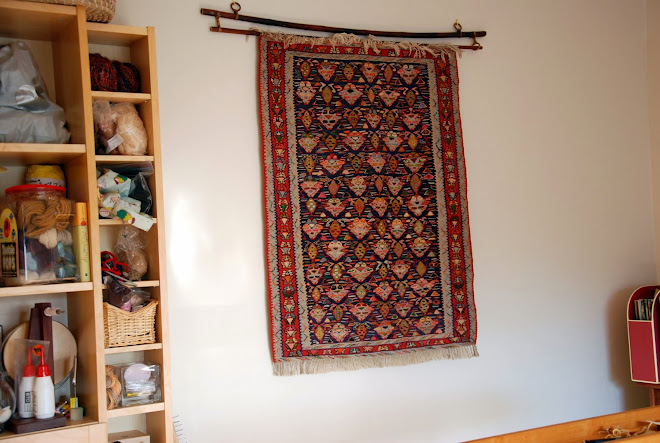 With much elbow grease and time, I used linen warp yarn to sew velcro strips across the top of my Christmas gift kilim.  Such a warm addition to the studio!  It’s just behind my Mighty Wolf loom. Tomorrow, I have my 4th weaving class in the fall term. 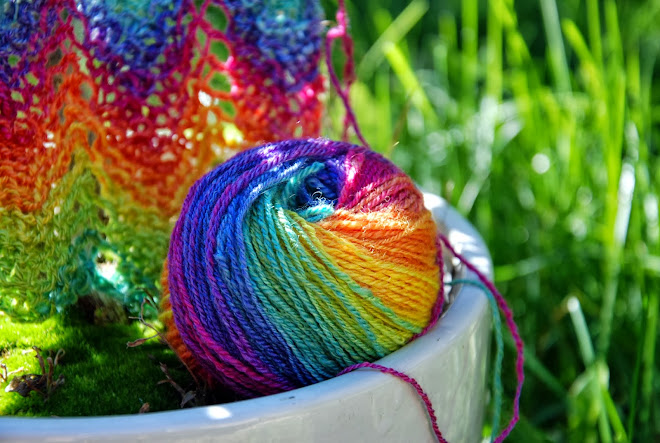 Many thanks in material form

A new commission has jumped off the wheel (Watson, Martha) and onto my needles.  It’s for someone special, and is making me ridiculously happy. 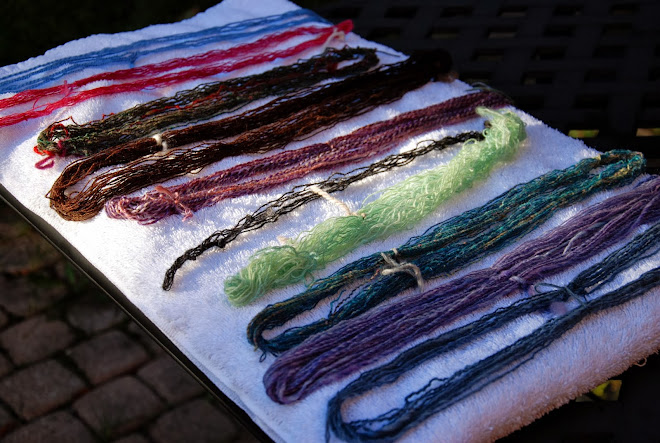 Clearing a bunch of singles.  Each was once a sample that came from a fibre event or with a spindle.  As a bonus, I got to practice the Andean plying trick while reliving good times. 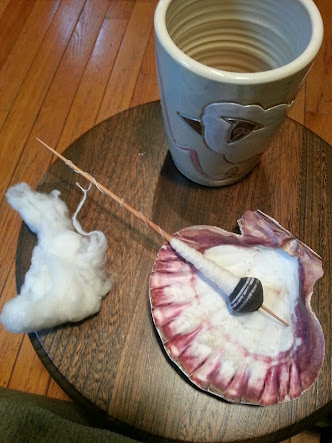 Mahatma Gandhi was absolutely correct.  You do want to spin cotton each day.

I feel that the spinning wheel has all the virtues needed to make one’s life truthful, pure and peaceful and fill it with the spirit of service. I, therefore, beg of you all to give half an hour’s labour daily in the form of spinning. 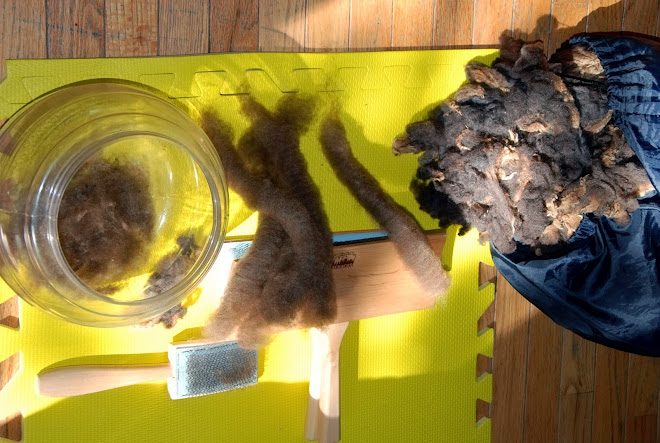 This is my start of the 4th round of singles for my CVM wool project.  I use the Louet flick card for each lock before charging the Schacht cotton hand cards.  The waste for 5 rolags is in the container on the left.

In this round, I am retiring the Tabachek top whorl spindles, and have introduced my now cleared Andina low whorls.  My hope is that using 4 low whorl spindles will even out the spinning phase. 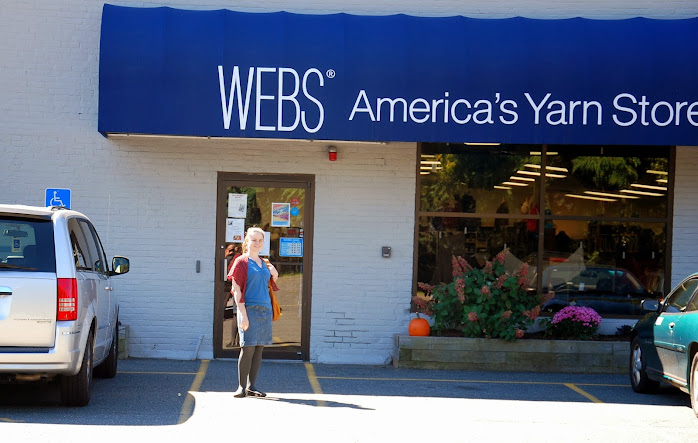 I am blessed to be able to make visits to stores like WEBS, and to know that a Moosie and her tulipwood shaft are making their way to our home as we speak.  This article bounced out of my Twitter feed, today.  Reading reminds me again that each of these unwaged activities has as much value as my previous waged work.  As boneheaded as this lifestyle strikes many in my sphere of reference, I have tremendous support from my family unit.

My commissioned lace stole is overdue for her reveal!  What began as a serious inquiry last Boxing Day on broad specs grew into an original stole design with beautiful Helen’s Lace yarn and light beading.

Although knitting for hire was a bundle of new challenges, I knew early on that my label as it were would be Irieknit.  This is, after all, the way that many of you know me as a spinner & knitter on both Ravelry and Twitter[.com].  My ‘irie‘ designation dates back to birth.  In full-flush of First Time Dad excitement, I was announced to the world (via a Gleaner classified ad) in all caps as born that day “one IRIE GEMINI…”

Then as now, some got it; others not so much. 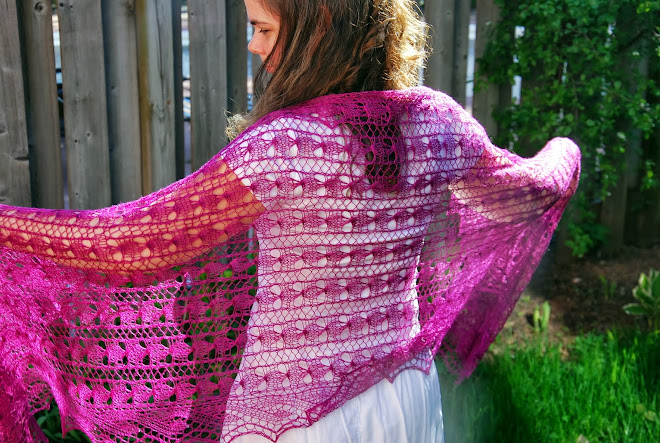 The colourway of this 50% silk/ 50% wool yarn is Berry.  The stole used 950 yards or 85g of the yarn with the body and border knit with different sized needles. 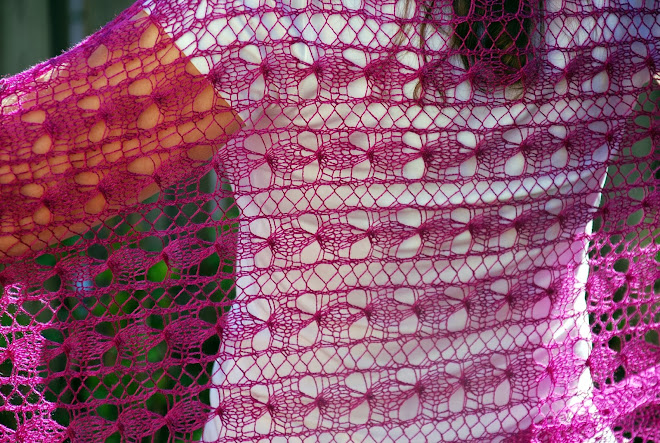 The centre is the Melon pattern from Victorian Lace Today with repeats added to the panel.  Thinking of my Jamaican client as I knit lent the motif a decidedly Caribbean feel.  One thought led to another and soon I had a doubly-wide border of soft waves.  The VLT techniques pages were very empowering.  They helped kick me up a notch to lace design. 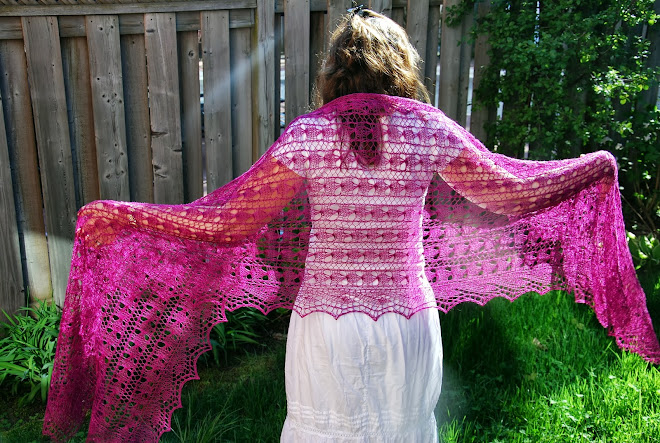 The client’s wide brief is what also allowed me to go farther.  Following my muse often takes me back to poetry.  This 27″ x 88″ stole is named Sea Grapes after Derek Walcott’s 1976 poem:

…for the sea-wanderer or the one on shore

now wriggling on his sandals to walk home,

since Troy sighed its last flame…

The classics can console.  But not enough. 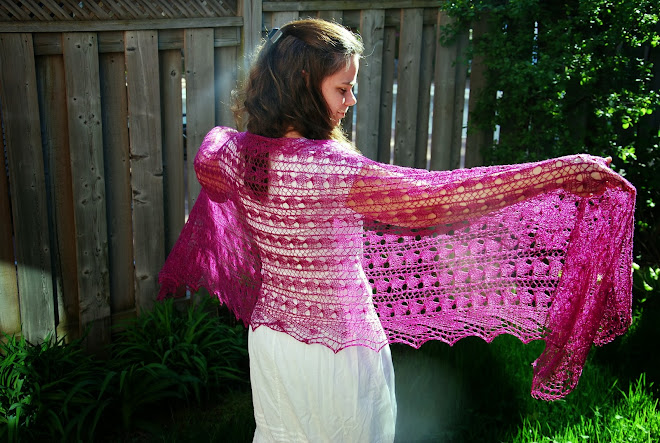 People often ask, “How long does it take to knit that?”  In this case, I have an answer based on a focused lace knit.  The knitting time was 30 hours for the body; 17 hours for the border.  It was made over 17 days.  This does not include 2 hours for blocking or added prep time & design work. 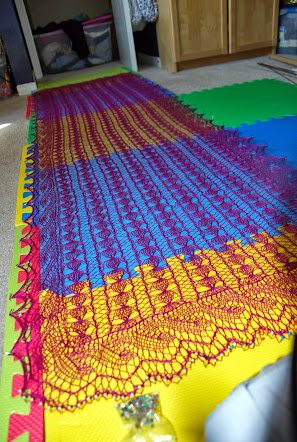 Producing knitted lace of this scale for hire changed my work days, and lifted my game.  In the end, I was happy to deliver an item that can not and does not exist elsewhere.  It came as much from our relationship of many years as from my skills, time and materials.  We are both happy. 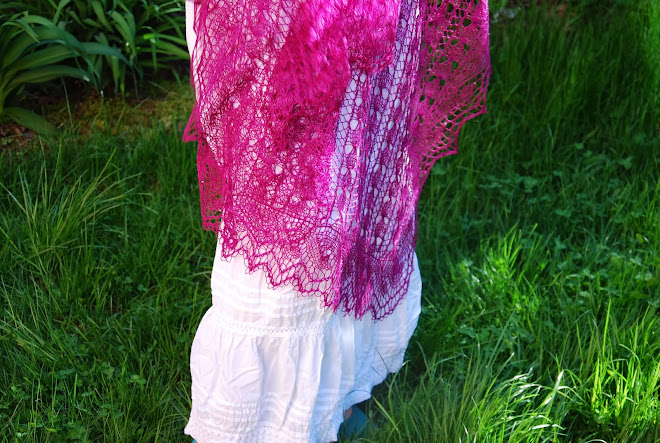 Supporting handmade matters.  I’ll be happy to collaborate again in the future.