The Royal held its annual fleece auction at the tail of the Fair in Toronto, Sunday before last.  My quiet initiation to this event came two years ago when it was held on the second level above offices & stable.

It was a cheap & cheerful sort of afternoon.  Not only did I make out with 11+ lbs of freshly shorn local wool that I love but I learned a lot.  We sat near the front of the room and got to hear some of the off-mike conversation of the experienced auctioneers.  An under-the-breath, “the judge says that lamb’s fleece is tender,” is something that I need to hear.

This year we arrived earlier, and saw the judged fleece on open display.  As you will hear why later in this post – they were in frightening proximity to one another.

Many animals were already being loaded by farmers but some were still in their stalls, and cages.

One of the few as yet unshorn sheep in the barn.  This one was very happy with head petting, and I obliged while N chuckled.

Since a certain rabbit loving friend couldn’t be with us, I had to include some of the adorable bunnies.

Babies – mother Bun was glowering in the foreground

They were winning hearts, and influencing people based on the rush that we saw at the rabbit sales table!

The alpacas were also a big hit with the crowd.  A young man was spinning their fibre using a Canadian Production Wheel (CPW) right next to them.  He was doing a great job of answering questions.

Alpaca at the Royal

In the midst of walking around N was dealing with a work crisis by phone, so we went into the auction area while it was still fairly empty.

As people & fleece arrived, I knew that the Grand Champion fleece would quickly go out of my reach.  I wasn’t wrong!

First Prize in the Championship class

This way I can remember what earns a perfect score for lustre in the judges’ books.  The note was “beautiful brightness.”  They sold this lot first.  There was competition, and it went for $9/lb or $72.  This was under the 2011 Grand Champion winning price of $21.50/lb or $96.75.

She shoots; she scores!

The second prize in the Down-type category was this 5.8lb white fleece from Shadow Rock Farm in Schomberg.  A pre-wash cold soak took care of a LOT of dirt (etc.).

My next fleece came with a fight, and at a huge premium because of that fight.

The fleece is dead.  Long live the fleece.

An Icelandic moorit fleece off a ram lamb.  It was judged second behind a Shetland ram lamb fleece that I let go when it hit $18.75/lb.

In competition the 2.3lb fleece went for more than the first prize Shetland in this ‘Specialty’ class.  These pictures were taken the next day.

Here is where it starts to hurt

What I saw made my heart sink.  The words “fine sand-like particles” came to me.  For that is the description commonly given for the eggs of the clothes moth.

You can see them in the lower, right of this picture above.  I saw them in the bag and all on the outer areas of the fleece.

Clothes moth larvae – fresh off the fleece, and totally alive

A few hours into my cleaning, I got new knowledge first-hand.  What at first looked like strange, smooth grain turned out to be the wool-eating stage of the clothes moths’ development.  In quantity.

On Monday, the Royal let me know that I will be refunded in full.  It was curt is what I will say about that.

The real anxiety is not about cost vs. benefit.  It is about whether this infested fleece is a house-wide moth problem for us.  In the hours it took for me to get verification of my worst fears, the pets were moving freely around the area.  I have taken all steps to rid the house of any stray eggs but they evolved to survive.  It is their special skill.

I am really grateful for friends who gently guided me to realize this fleece I fought for really isn’t worth the risk.  Further steps can be taken.  I considered using our chest freezer for cold treatment & thaw cycles.  Even if it worked to kill all eggs – and it might not –  I would still have damaged fleece at the end of the day.

The moral is:  always work with raw fibre quickly even if it is from a trusted source.  In the future, I will leave it on the other side of the threshold first.

The warning is: if you bought at the Royal Fleece Auction this year, be extra careful.  This may have been next to yours in that pretty display.

It’s been weeks, and I still can’t believe this statement is true:  I have a Moosie!  The whorl is 1.75″ of handcrafted moose antler on a tulipwood shaft.  All together with a balancing pin she weighs 28g or one ounce.

Jonathan & Sheila Bosworth offered a group of 10 with 5 different special shaft woods.  They were all lovely but the sole tulipwood #7 was my first choice.  Sheila helped me to decide on a 9″ length. Its spin is even more beautiful than I dreamed.  First there is the smooth but softly grained wood as I set the spindle in motion with a thigh roll.  The spin is fast without being aggressive.

The fibre is “Cherry Fudge” Shetland top from The Painted Tiger.

Re-purposing for a Gift

Mom celebrated her 60th birthday in September.  With a deep list of in-progress items, I still had enough time to dig out my first large shawl and its glaring corner problem. 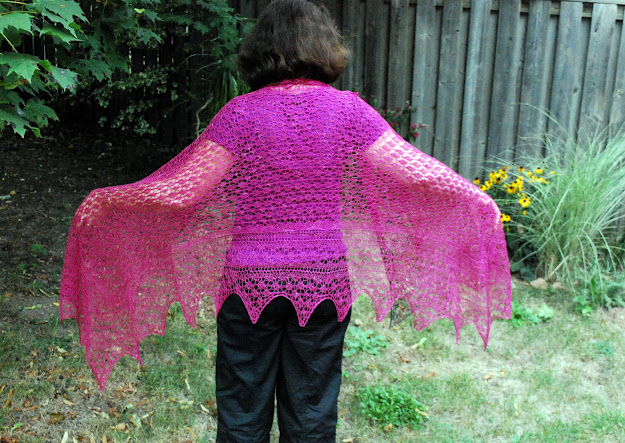 One of these corners is not like the others

What glaring corner problem?  I was honest and brave about it all in this September 2011 TKK post.  Eventually, the (ahem) swatch turned up, so I had a little extra matching yarn on hand.

Eek that corner out

Fuchsia is Mom’s new favorite colour.  It was perfect for her, and she can use it this coming year in Europe on her sabbatical.  That was the theory.  In practice, I had to un-graft and not loose any stitches.  That was a big, scary pain and a half.

Live stitches caught, pattern rendered, and Lo!  I ran out of yarn again.  This was my Bloody Hell moment, and I thank those of you who saw my tweets and offered words of encouragement.

Sleep always helps, and I came up with this flaw of a 3-needle lace bind-off.  I am happy to report that the flaw has use – it’s Mom’s way of knowing which side is up!

Melvin was risking life & limb by interfering with the shawl at this point.  He knew better than to push that particular item completely off the table, I think.

In and among more Super Secret projects, I started an RPM sock in my Lorna’s Laces Shepherd Sock yarn, “Lakeview.”

The spiral pattern is easy to work on the two circulars, and I love how it is breaking up the pools of colour in the variegated yarn.  The only thing that I don’t like is the join on these particular needles – they are Knit Picks Options nickel-plated fixed circulars.  I knit tightly for socks, and moving the stitches across the metal/plastic join is not seamless.

Week before last, I did beam this narrow warp on the Mighty Wolf loom.  It was very useful to take what I am learning in the BAC classes, and apply it to my home loom.  It’s taking me awhile to get started on threading because life has taken over.  When sunny  weather returns, I will take pictures of my class sampler.

Working with this muga silk that I bought from Morgaine this Spring has been a sheer joy.  The scientific name of this species of wild silkworm from Assam, India is Antheraea assamensis.  It is far more delicate than the Bombyx mori silk that I have spun, and the gold colour was entrancing.

The singles were spun on my Wee Peggy wheel in double drive using a crochet cotton (plied on itself) band.  I plied on my Watson Martha wheel also in double drive, and with a linen (10/2) band using the small whorl, 1st ratio.  This is approximately 604 yards from 1.6 ounces of muga silk in batt form.

(edit only to italicize a term)