We are now at extreme cold weather alert the 10th of this winter.  It has been a full 29 days under -15C.  This week just added to the stats.  It is no mistake that I was working with my brightest, happiest handspun yarn. 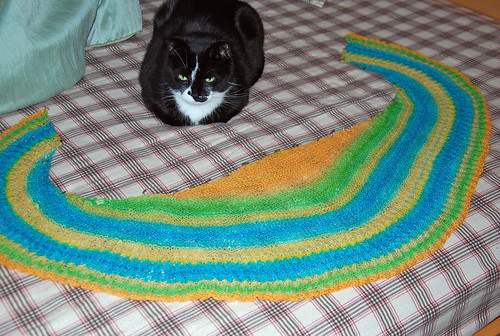 The shawl pattern is by Susan Ashcroft, TGV (tricot grande vitesse – High Speed Knitting).  The projects on Ravelry are very close to 2,000 strong.  Of those, 68 projects record the use of handspun yarn. 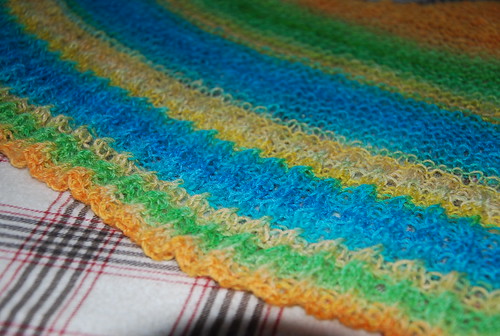 Sunshine in a knit. Seriously

It is an easy design to knit-up.  The later rows are very long, and that slows progress a bit for me at least.

That would be the yarn leftovers.  I used up the 408.46 yards of handspun.  It was planned too (I swear!)  How?  By casting-off, raveling, and weighing how much that took.  It was 4g just to cast-off that long, long edge. I wanted all the orange; as simple as that.

Such a joy in the wearing

A crescent scarf is what it is

At the deepest point my TGV is just 11″ edge-to-edge.  It wraps best for me with the deep edge to the front.  Much more scarf-like than shawl-like in the wearing! 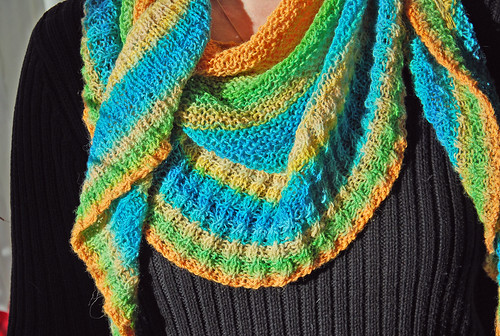 In an effort to avoid the Rocks of Boredom for yonder ribbing section, I turned it into a Baby Cable Rib.  The recipe is in Barbara G. Walker’s A Treasury of Knitting Patterns.

The variation is subtle in the FO but it improved the knitting up for me.  I knit socks.  So I know that 2×2 ribbing is great just in moderation.

Sure, this shawl is bringing the bright back.  It’s not just about Handspun! and Accent for the Drab! though.  It’s also keeping turtleneck shirts at bay.  And that dear readers, is a really good thing.

In sum:  easy to wear; bright; not a turtleneck shirt. Yay!

How long did that take?

Let me walk you through the timeline.  We will wake the TKK archives up a bit too.  In April 2012, I won the awesome braid from Nicole at Stringtopia’s doorprize party. 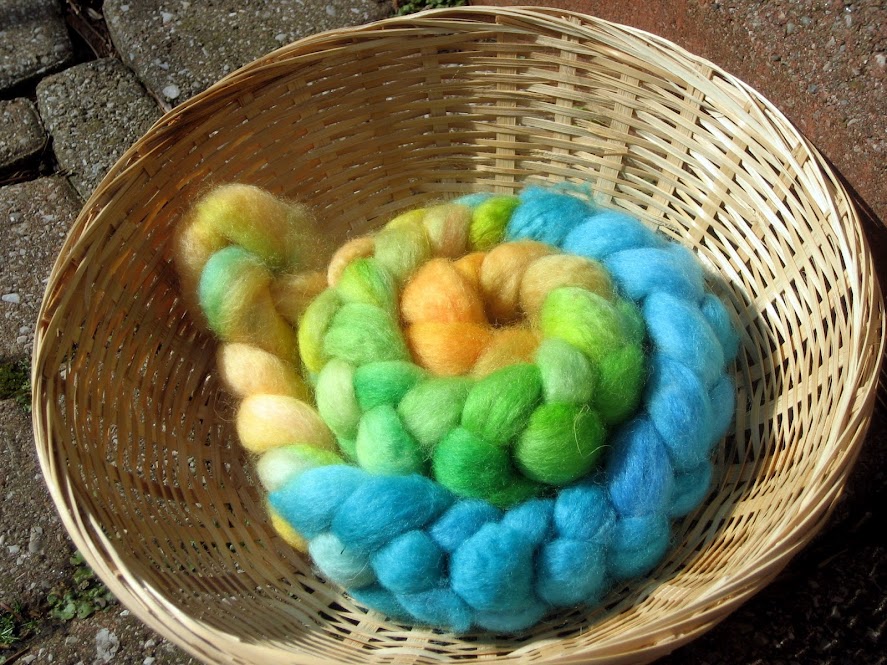 It sat on my fibre shelf until I wanted a new project for the 2013 Stringtopia event.  Thus, it snuck into that April’s Making Progress post like this. 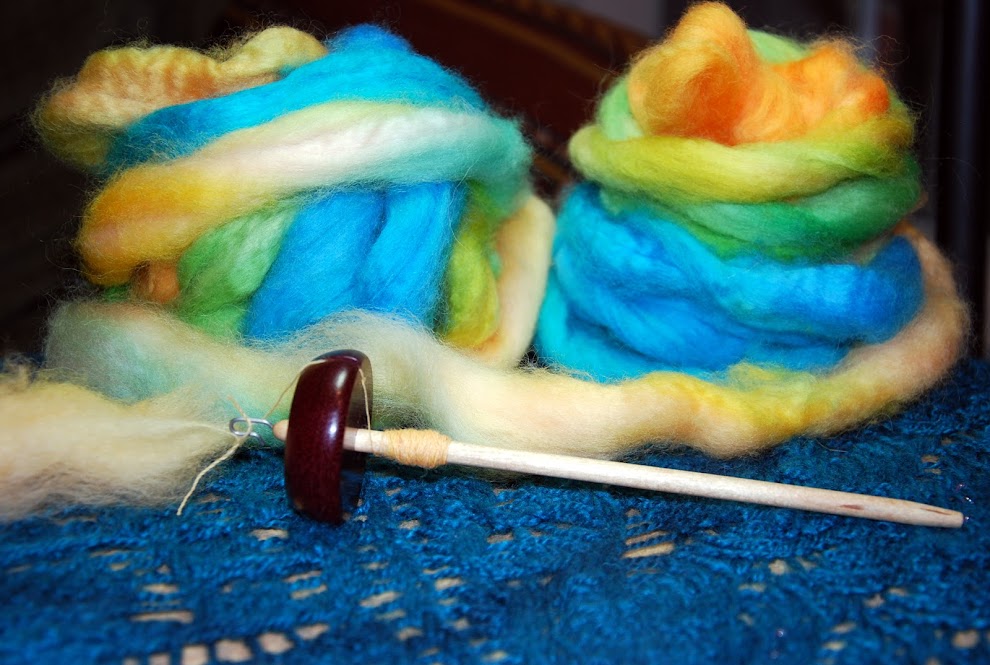 The seedling of the shawl: April 2013

As I reported, a lot did get spun at the Golden Lamb, 2013 String Thing.  That closely followed with a full spindle in May, 2013. 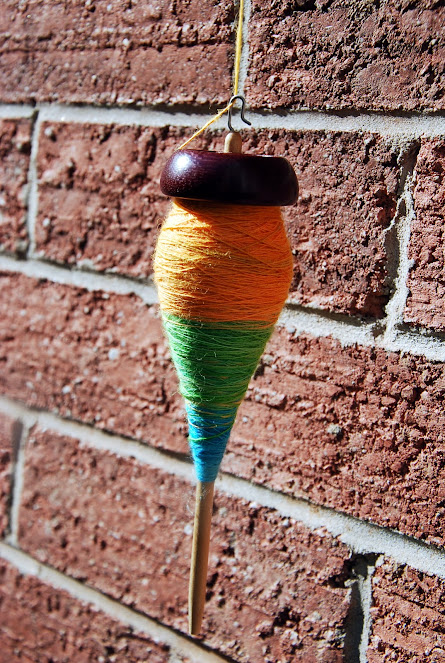 I was so stoked

The second ply was spun by early July 2013, and I had yarn to show for it during the Tour de Fleece.  It positively loves the camera. 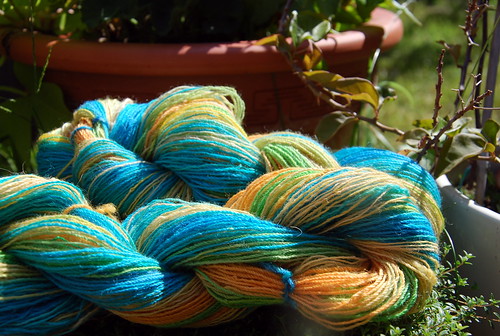 The only stage of this journey that didn’t get blogged on was  when I whipped it out on January 9, 2014 and started to knit.  Here is how she looked on the needles! 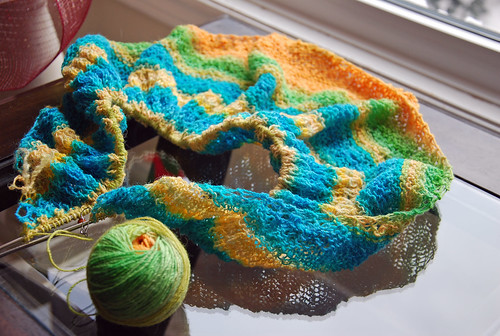 TGV shawl when she was in progress.

Nicole, you have my deepest thanks for such an epic doorprize.  I love it so much! 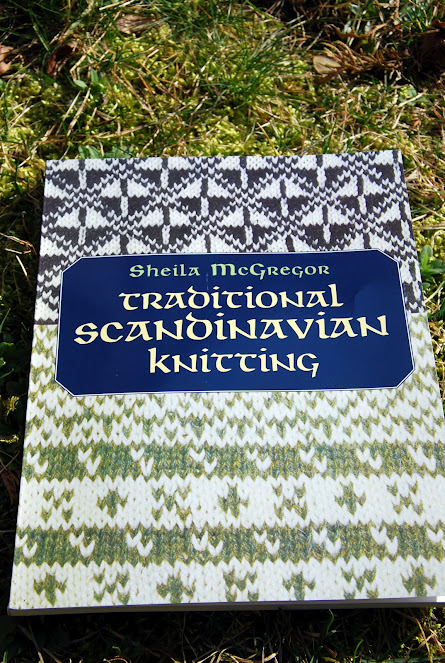