Finished in no time flat back in February was this first of the knits for my baby nephew. 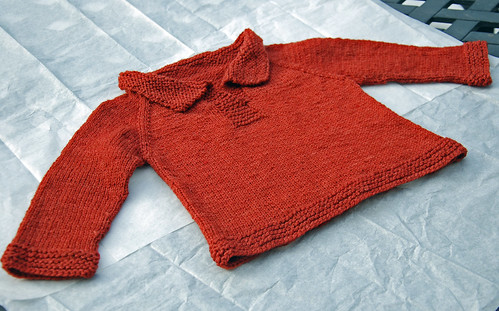 The design is Telemark Pullover 2.0 by Erika Flory in natural wool.  I substituted this lighter Sheepspot’s Clun Forest sport-weight yarn with glee.  As Sasha’s newsletter told us she sourced the fleeces from a single flock, Ferme Luciole, in Alfred, Ontario last June. 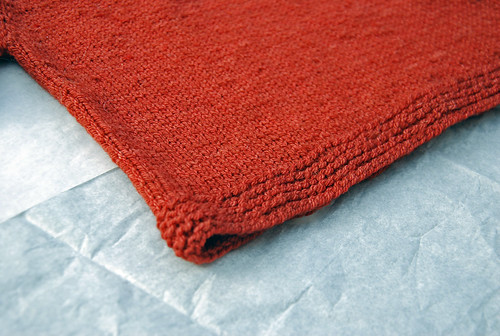 The wool is springy but has such a crisp look in the Paprika colour and this simple sweater.  I was 2 stitches under the recommended pattern gauge.  At the 20 stitches per 4″ in stockinette stitch using 3.25 mm needles, I cast-on for the 1 year size, and fell between a 3 – 6 months size. 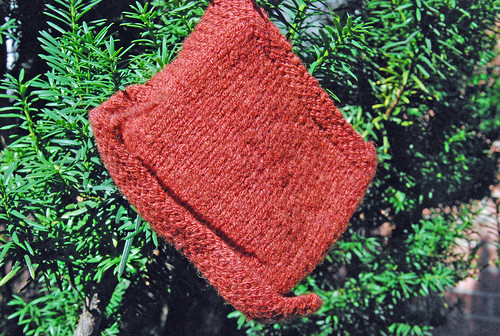 Swatch through the wash

Sheepspot has processed their wool with a lighter chemical touch – none used to dissolve vegetable matter or to treat the fibre.

Loving the more natural process is one thing but why choose this for a baby garment?  Well, I had a hunch that a 100% Clun Forest yarn would have some of the Down breed family’s superwash quality.  In her History of the Clun Forest Breed, Rosemary Ruddell writes:

As you will see in a later post, the word “Southdown” rings a bell for me!

A little knowledge being a dangerous thing, I have experimented on the swatch.  Before going through the front-load washer & dryer cycle it was 6.5″w x 5.75″ h.  It’s now all nice round numbers.  The approximate change is 8% less width & 13% less height.  It is ‘fulled’ & has a softer hand after washing.

Not bad!  Not bad at all.  50% is reported for a Corriedale sample in the Winter 2015 Spin-Off magazine by Cindy Craft, p. 46.  I wish more numbers were given from her 6-breed experiment in the article.

If you would like to see the project notes on Ravelry it is called “That Seventies Telemark.”  Whatever its laundering future, this is a hardy sweater made in Ontario for baby F’s first cold weather days.