Warm (i.e. wooly) congratulations to the flock that I wrote about in my last post!  Laurie’s Little Lambs farm won blue ribbons in 2 categories of the 2015 Royal Agricultural Winter Fair fleece wool competition.  Both are in the competition’s Down-type category (26-33 microns).  It was their first year exhibiting, and I am very happy they got such stellar results!

Partial as I am to coloured fleeces, I had a moment when Bob showed me Norris’ clip.  I’m so glad to see Norris’ name beside a first ranking in the Royal’s results list, and know how pleased Bob must be!  His entries are both sure to be in high demand at the fleece auction this Sunday, November 15, 2015.

Bob & Laurie’s flock has around 50 sheep, and all are registered with the Olde English “Babydoll” Southdown Sheep Registry.

Southdown is the oldest of 6 true or core Down-type wools.  In “The Fleece & Fiber Sourcebook” Deb Robson & Carol Ekarius note that Southdowns are in records dating back to the medieval period from the South Downs, England.  The area is along the English Channel in today’s Hampshire & Sussex counties.

The rare-breed status is ‘recovering’ by the Livestock Conservancy.  Rare Breeds Canada’s 2014 conservation list shows Southdown as ‘vulnerable’ (101 – 300).  Bob & Laurie do breed their registered Babydoll Southdown sheep for sales.  It would be great to see the breed’s status shift up to the next category in Canada, ‘at risk’.

While Bob showed me some of this year’s beautiful clip, Laurie graciously gave N. a tour of the farm.  It was wonderful of them to have given us so much of their time, and in turn I showed Bob some of the tools that we use as spinners to prepare wool from scratch. 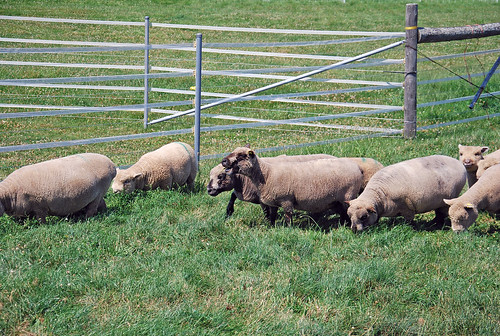 All pictures from this July’s visit to Bob & Laurie’s farm were taken by a very impressed N!

The lock strength, crimp, and colours in this fleece from Bob’s ewe Olivia were just so appealing to me.  Olivia’s fleece was carefully rolled, and it was easy for me to see which end was up as it were!

All colours are acceptable within the olde-type Babydoll Southdown’s breed standard.  This is an advantage since as Deb Robson tells us in her Winter 2015 article in Spin-Off Magazine, “The Down Wools:  quiet and unsung heroes of the fiber world,” the Down wools are mostly white.  On page 71 she says,

The most reliable source of natural, non-white color within these breeds is the Southdown, of which there are at least three strains of varying sizes.  The smallest, the Babydoll Southdowns… [is] the group from which you’ll most likely find colored fleeces.

Using the Unicorn Power Scour for this fleece was a big improvement in terms of steps to lanolin cleaned locks.  We needed to repeat cleaning for E’s white ram fleece when we used original blue Dawn detergent last fall.

Try as I might there was no separating Melvin from Olivia’s wool as I worked on cleaning.  This was still the raw wool, and he does deign to move when told that it’s needed for washing.

The pigment shifts evenly across the fleece’s locks.  The butt end of the locks is consistently lighter with a darker tone above.  The locks are strong – it’s simply a colour shift with no break following the line.

A preliminary test with a new-to-me set of Meck paddle combs confirms my idea that the colour blends very nicely if I alternate the lock orientation when charging the combs.  One small 2-ply skein shows as a heathery blend of the colours that I love, and could possibly over-dye.

No matter what this will be an interesting fleece to process as a spinner!  My hunch is that the yarn could have a warm lilac undertone.  I can plan around any colour inconsistency, and am not even married to a single large project for this fleece.

I never dreamed that agreeing to mentor E would help evolve my work in this way.  Now that we are in this eventful late fall, I am excited about working with an incredibly soft & unique wool.  That it’s also come from an award-winning year for Bob’s flock is just such an added reward.  Hopefully, I can show E how the multi-coloured fleece compares to hers soon!

Looking forward to being blown away by the fleece auction’s competition for the prize Babydoll Southdown wool!  Will you attend, local friends?