Best wishes for a happy & safe season to all!

Our Peace and Quiet plans got thrown last Friday when N woke-up with a bad rash.  It’s shingles, and this quickly became a painful week for him.  The treatment is working but his skin continues to be very tender. 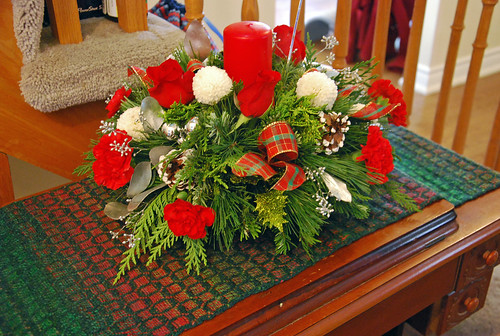 While making do without a tree for Christmas time, the new woven runner & a special delivery are both giving much needed cheer at our place.

A beautiful potted Poinsettia has also been doing a very good job in the living room.  We have traditional ham, etc. looking forward to as well. 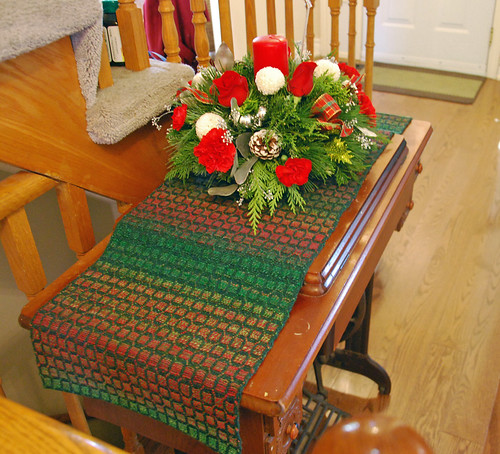 Festive colour splash, thanks to handspun

The winding of my handspun for weft created a regular break for showing the yarn’s colour gradient.  The repeat is enough to bring the break together, and I love seeing the bands as I walk through the hall.

In planning, I allowed 15% extra Harrisville Shetland warp each for shrinkage and take-up after weaving.  This weaving of 55″ with 3″ hems on the ends has washed as a 46″ long runner for our vintage Singer sewing machine.  The width is 13″ (i.e. down 2″ from the reed width after washing).

When not posing for pictures, the table sees good use holding keys, spare change & so much paper. 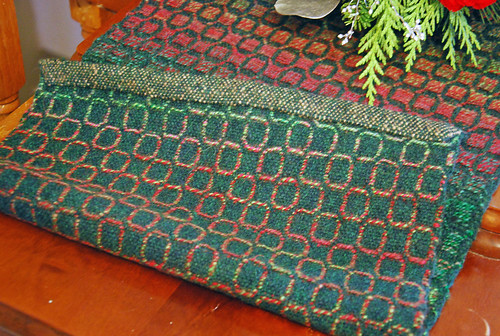 The fulling process did wonders for the reverse of the fabric as well.  I love the handspun pops.  The plain weave hems are hand-sewn with some of my late Grandmother’s thread.

The hems’ weft is also handspun that I dyed this spring – the rejected ‘soft’ sand weft in my Colour of Water guild show scarves.  It is 50% silk/25% buffalo/ 25% white cashmere from Sericin Silkworks.  With under 200 yards, I am having fun with it. 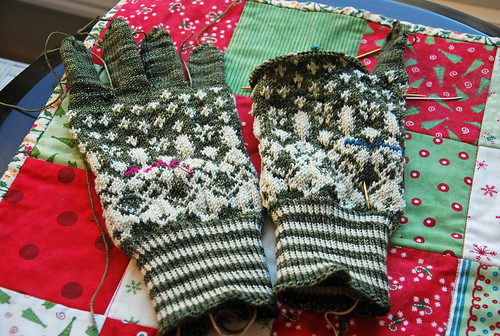 Knitting for the sick one is going to be today’s big task.  The incredibly mild weather – hello, 16°C in our town on Christmas Eve – takes some of the pressure off but I would like to finish 3 fingers, and 2 thumbs. 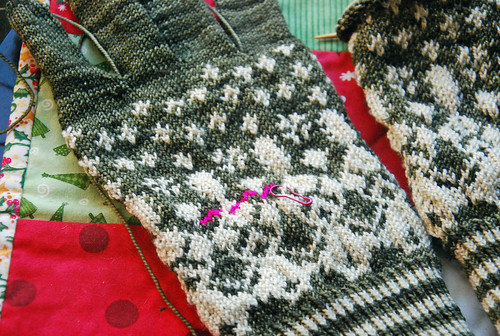 Stranded, and his choice of pattern

Needing to size for N, and correcting an unforced knitting error in the second glove (thumb placement matters!) have made this a race to the deadline but that’s okay.  It is not like he is headed outside or like outside is very cold.

Please be kind to yourself, and to others.  This season can be so full of expectations, loss, strife.  Via Irwin Elman on Twitter, If the holidays are hard for you, doing these 4 things really could help.

Whatever your observance or none, wishing you joy!

The ROM’s first exhibition celebrating its Mexican collection is open through May 2016: ¡Viva Mexico! Clothing & Culture.  The exhibition includes around 150 pieces spanning 300 years.  This May the Museum hosted master backstrap weavers, Crispina &  Margarita Navarro Gómez as a complement to the exhibit. 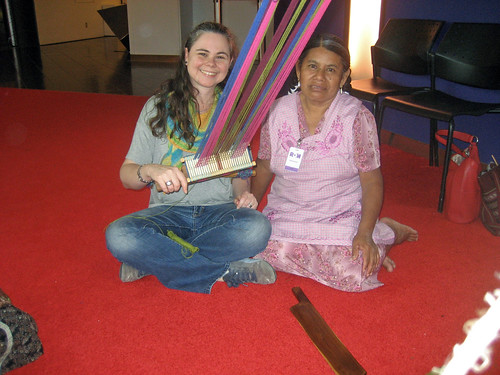 Weaving with Margarita Navarro Gomez at her demonstration backstrap loom

I visited on May 19th, and was able to meet the artists-in-residence as they demonstrated outside of the gallery.

Curator, Chloë Sayer, spoke with me & also helped with translation since I do not speak Spanish.  With her help, I asked the sisters questions about their work, and home in Santo Tomás Jalieza, Oaxaca state.  I learned that the sisters do not typically spin but use mill-spun threads, and are of the Zapotec culture.  It was also fun for my part to show a little spinning of East Friesian wool roving on my vintage Andean low-whorl spindle.

Luckily, it was still quiet when I got back after lunch with N.  A very nice docent was helpful for other visitors, and Margarita helped me into weaving on the demonstration loom.  The machete was so smooth, and effective with its handle but I kept wanting to use it blade-down (wrong way!).  Margarita also helped me get used to the loom’s rigid heddle, and then also wove a flower motif with me strapped-in. 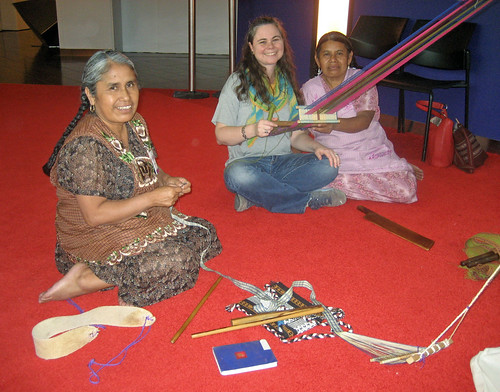 Crispina had just finished weaving her band with fine threads.  As soon as she threw the last pick, she set about braiding the first ends.  It was a truly beautiful band, and she just continued straight into the next step while Margarita worked with me. 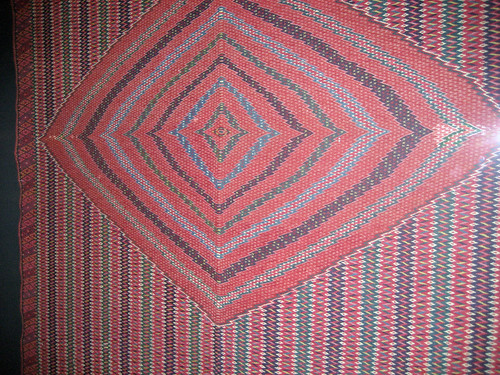 There are so many beautiful backstrap-woven pieces on display, and many are natural dyed as well. 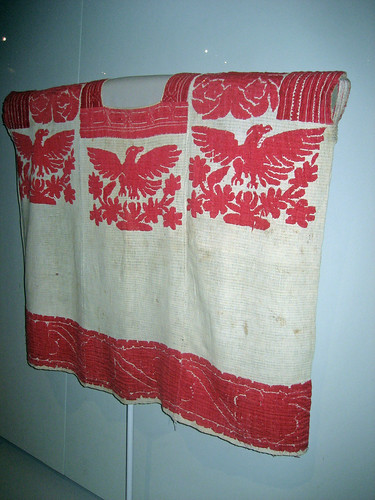 The main design motif of this huipil (1875 – 1899) is embroidered on the tabby & gauze handspun cotton fabric.  The exhibit says this strong eagle resting on nopal (Opuntia cacti) motif represents the founding of Aztec culture in post-revolution Mexico. 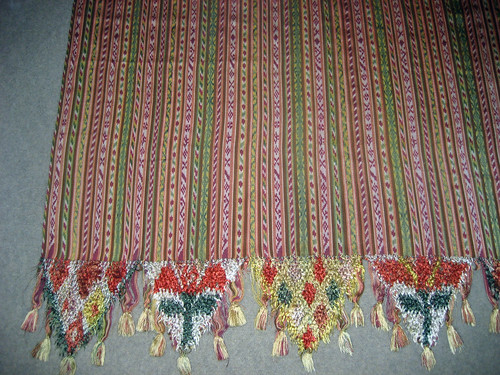 The exhibit is in the Patricia Harris Gallery of Textiles & Costume on level 4 of the new wing.  I’d love to go for another visit, and gain more understanding. 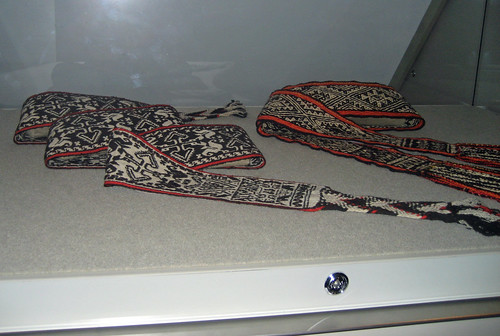 A few more pictures are up in my Flickr album, and I recommend it for anyone who is interested in Mexico’s material culture, and innovative textile production, generally. 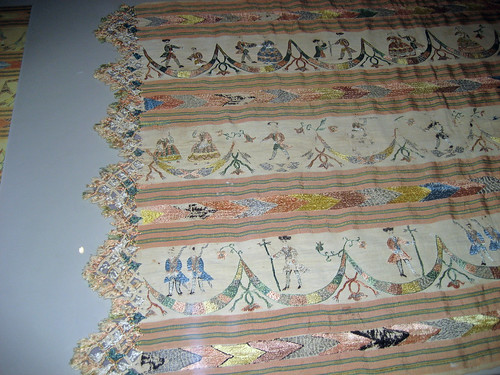 At last, the loom was warped

Sometimes the best obligations are those we set for ourselves.  The ice-breaker into weaving again was a table runner for our front hall. 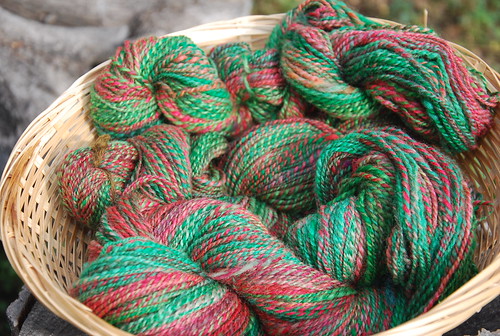 This was approximately 502 yards (1,004 yards per pound) of BFL from top that Waterloo Wools dyed as ‘Holly and Ivy’.  It was a quick spin in mid-September on the antique Nova Scotia McDonald wheel, and plied on my Watson Martha also in double-drive. 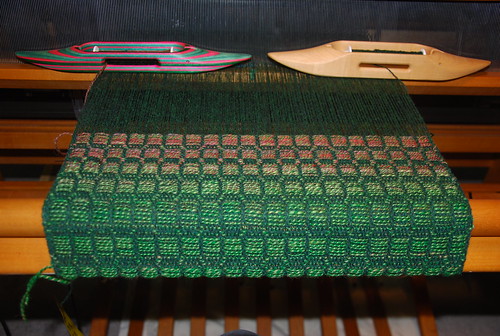 The warp & tabby weft are Harrisville’s #9 evergreen in Shetland.  It is 1,800 yards per pound, and I used a 15 epi sett estimating for plain weave.  The pattern is in Marguerite Davison’s “A Handweaver’s Pattern Book,” p. 120 I.  We had a flip-through, and when N strongly preferred this Elizabeth-Jane’s design, I got to figure things out. 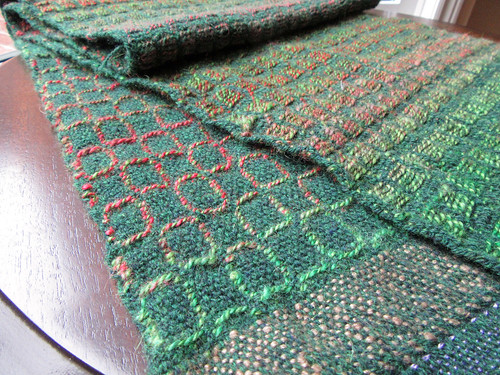 Washed! Circles on the flip-side

You’ll have to take my word for it due to poor lighting at the moment – the hemmed, and pressed runner is now rocking our hall’s vintage Singer sewing machine.  Holiday cheer is unlocked!

It was 15″ in the reed, and with my wet finishing is fulled to 13″ width and 46″ length.  The hem’s weft was a flourish of handspun that was already on a bobbin. 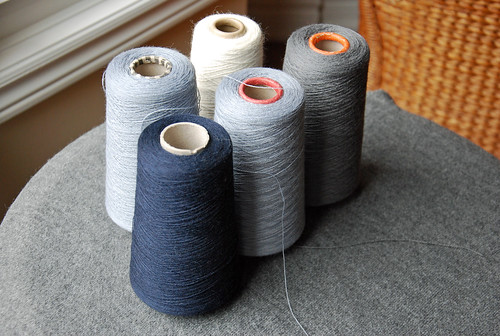 These cones of mill-end yarn arrived, yesterday.  With lots of holiday & new baby knitting ahead, I also get to look forward to keeping my Mighty Wolf open for business!

On what was a pretty ugh day, the restored flyer for my antique flax wheel arrived in the mail.  It’s been cheerful around here ever since! 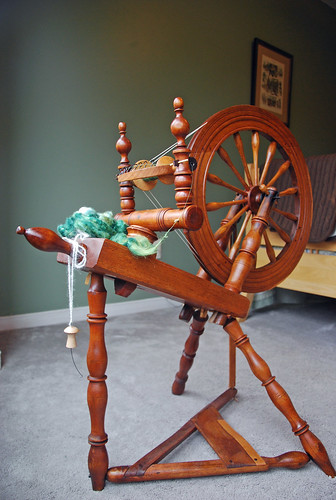 All in one piece!

Regular readers & Twitter followers may remember this wheel as coming home by accident from the Ramer spinning wheel collection.  Not all of my wheels have names but hers is Linley. 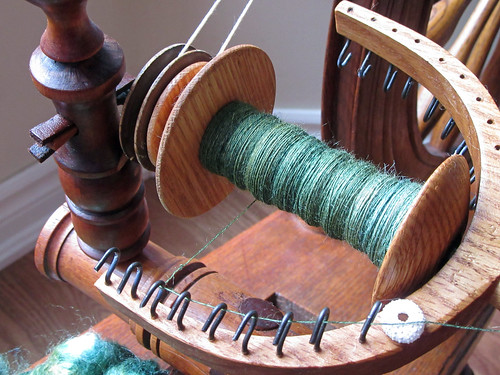 Along with other repairs, Alvin Ramer re-built her flyer.  It has the wide arms that I love for wet spinning flax, and he also made 3 new oak bobbins.

The issue was inside the antique whorl, and it completely lost all traction after I had a blast spinning 618 yards of 2-ply yarn from silk caps.  It was too loose for a teflon tape fix, and I needed professional help.  Non-spinners, this is code for I got lots of twist but the wheel could not wind the yarn onto the bobbin.

Tension is the magic that allows your wheel to fully function.  And it is probably the single most important thing you can learn about your wheel.

Reed Needles, Wheelwright in St. Mary’s Ontario gave me an on-the-show-grounds consultation at Woodstock this October, and now we are back to working order.  If you haven’t met Reed, the CreativFestival blog has that nice feature post about his work & with tips on restoration issues. 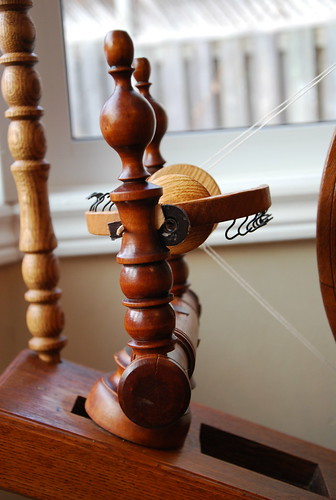 A very flax orifice – it’s tiny and it’s round

The orifice hook that you see in the 1st image is also Reed’s work.  It is custom to fit the wheel’s 7 mm diameter opening.  This is slightly larger than 4 mm diameter of the William McDonald Nova Scotia flax wheel fluted orifice for example but is way too small for Reed’s standard hooks.  He has my thanks for such a great touch.  The bent paper clip is gone, Reed.  It is really gone!

In looking over the wheel, Reed had observed that the maker used cedar for her treadle. 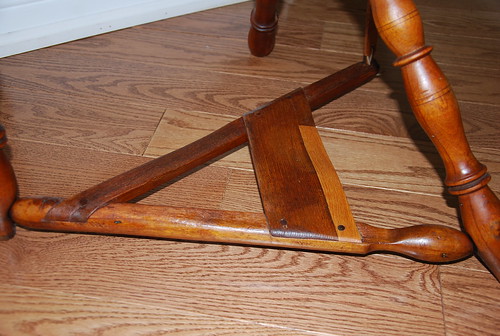 The treadle is as comfortable as it is pretty

This is a strong indicator for a Canadian origin. I am going to edit my earlier posts to add a note rebutting the Irish presumption!  Those posts still get views through search engine traffic. 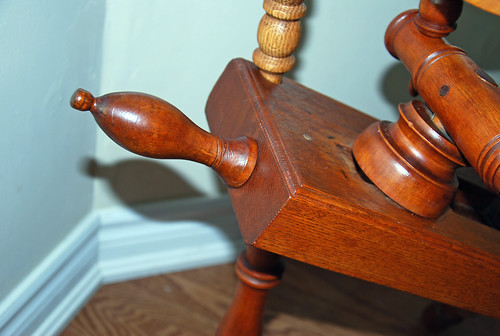 Heart of the matter, the tension screw

Reed also shares my love for Canadian flax wheels.  It was wonderful to hear his positive evaluation, and interest in my find!  The main wood is quarter-sawn oak, and Reed also liked what first drew me in as well, the craftsmanship in her details.  The tension screw matches the maidens’ design beautifully for example.

There is some not so good news too

Decisions are still pending, and I am treating the wheel gently.  Now that the flyer is stable, I am sure of a current alignment issue with the drive wheel. 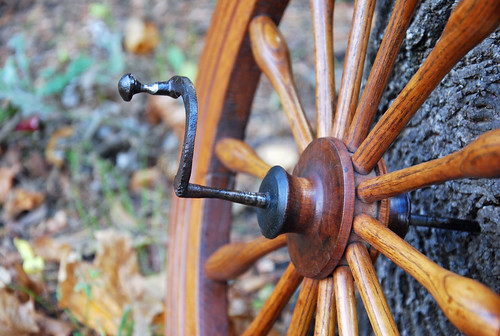 The rear axle is showing wear

The spinner’s side axle shows no wear but you can see how worn down the metal is on both contact areas of the rear axle.  What I can hear & feel while spinning is movement like a swash.  Crossed-off the trouble-makers’ list are:

A temporary fix has been to add smooth leather in the wall of the rear bearing.  Following advice shared in the Antique Spinning Wheels forum on Ravelry, I will also try to improve the situation with copper.  My other idea was to tape the axle wear points as a way to watch for more wear.

Ultimately, I may need to consider a replacement for the axle.  That’s a big repair.  I have also explored brazing a little but am concerned about possible weakening of the metal in the process.  If anyone has thoughts or insights, I would love to hear from you.  This is a new issue for me to learn about! 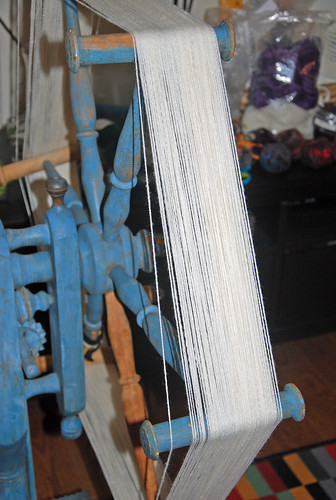 It’s been good spinning of late, and I wish the same for you!  This Polwarth project is up to 910 yards and counting on the Spinolution Mach 2 from a pound of undyed top.