These blankets are for my cousin’s twin boys – a tribute to her, and an extension of The Earl of St. Andrews district tartan to the parish of our birth in Jamaica.

The 1930 design is by A. A. Bottomley.  Having been created for the use of Prince George, it is a ‘royal’ district tartan.  The idea was not just what I thought Cat would like but also to weave a sett from “District Tartans” by Gordon Teall of Teallach & Philip D. Smith Jr. 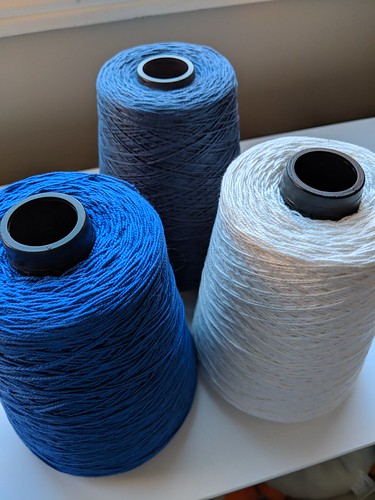 In January the Valley Yarns 5/2 mercerized cotton had arrived.  This is not an exact reproduction but I knew the shades would be key for the pattern to work.  The real work took several attempts – I needed to find a way to pivot the pattern, and fit my 36″ wide Schacht Mighty Wolf loom with the 3 lbs of cotton.

The sett that I chose is 18 epi, and I decided (wisely as it happens) to trust my colours without pre-sampling them.  In his “Handwoven Baby Blankets“, Tom Knisely gives a closer sett with this same yarn, so there was a clear choice.

A summer day camp for T made this all possible but not easy.  I happily started winding the warp on Emancipation Day, August 1.  Hemming was completed last night, August 17.

The initial impulse was frankly hard to live up to on this project.  It’s not for a lack of feeling but the opposite.

Weaving a wide project that is also exacting stretched me.  This is only my second wider warp, and was 31.75″ under tension (I used a temple/stretcher).  As you may have heard me at nights on Twitter that straight plaid line was only after a re-start.

Backstrap sticks to the rescue

The warp needed some help on the beam by around the half-way mark.  I added tension in spots, fine-tuning all the while.  The darker sticks are from an Indonesian backstrap loom.  They were long & smooth enough to prevent further trouble.

Cutting to hem the baby blankets

As I have said before, finishing the weaving often (heh, always until now) gets pushed-back.  This time I paced the weaving better & kept going although T was with me at home this week.

Matching but not quite

The blue-on-blue blocks are my favourite.  The half-tones coming together this well had me practically leaping to give them a hard press right out of the machine.

The twins are fraternal, and so are their blankets.  The 2nd woven on the right has a green hem instead of the pattern blue of the 1st woven.  It is also slightly longer.

Ready for delivery by hand

You have been very patient, and I am happy to be coming to meet your bambinos with our gift.  It all came together.  August has always been your month after all!

Making gifts to celebrate new lives is something I have stuck with through ups & downs.  The blog stopped hearing of them for the most part but this one feels extra-special.  Plus, I learned a lot in the planning and execution.  It wasn’t just booties and a cardigan!