In my last post I wrote about spinning a 2nd Shetland wool top from another dyer.  The spinning tools were the same & the process varied only very little.  As I saw during spinning, yes, the yarns proved to be so, so different.

Now that they are finished, I wanted to come back & compare them. 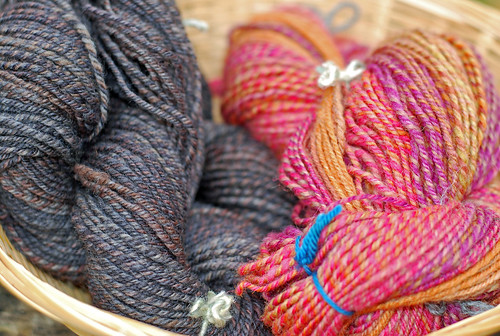 Furiosa from Sheepy Time Knits’ Female Heroes Club is on the left.  Its 2 skeins weigh 115 g, and are around 187 yards (748 yards per pound).  The colourway shifted gently, and as a conventional 3-ply lilacs and reds shoot through the darker tones.  There is depth to the 3-ply and the colours never muddied.  I suspect that Mandie kept her painting to the length of the Shetland staples but won’t be asking her to spill her trade secrets!

There was some but not very much kemp in this braid.  How long to wind-off the wheel? 8 days. 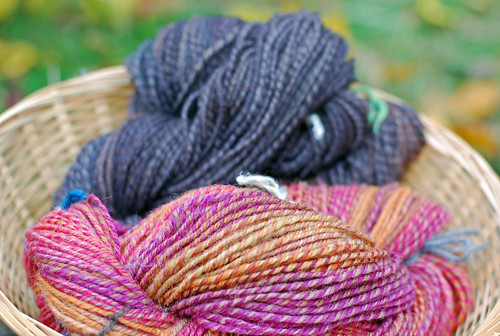 The Autumn Wedding from Sheepspot at Woodstock was lighter at 104 g.  The handspun yarn measures around 179 yards (1,925 yards per pound).

These were both quick spins, and again I didn’t analyse this fibre’s painting sequence.  This braid had 4 colours in a non-repeating pattern with different lengths between the 4 colours.  In other words, purple was shorter than pink, and there were strong ochre & orange runs as well.  The 3-ply from this braid is also complex but with strong, warm colours.  I will use this handspun in a separate project and not paired with Furiosa.

There was a fair bit of kemp, and the yarn is 5 g lighter than the braid was after the picking out.  How long to wind-off the wheel?  4 days.

To recap the method, both braids were spun on Wee Peggy, plied on Martha (Watson) spinning wheels with the same set-ups.  I divided each in thirds by measuring length, and fished out kemp before spinning.  It was a worsted-style spin across the full width of top in the same order of thirds, 1-2-3 order.

It diverged only in Autumn Wedding when the last ¹⁄3 proved heavier by approx. 11 g.  How I handled that was to stop, weigh, and add the last 5 g of hot pink to the 1st bobbin.  The up-shot is that last-dyed from section no. 3 walked up to section no. 1.  It’s a subtle shift but gets noted as enhancing what we spinners call a barber-pole effect.  It was still uneven but that’s the 2nd skein, 30 yards.

This is just one approach for colour in spinning:  keeping an open mind for what the dyer has created.  Next to each other but not a pair, the new handspun Shetland yarns are:

A side-note – do not pass over a mill-prepped dyed Shetland if there’s some kemp.  You can easily pick it out, still have a quick spin, and avoid (gah) scratchy (sometimes called rustic) handspun skeins… just ditch that kemp! 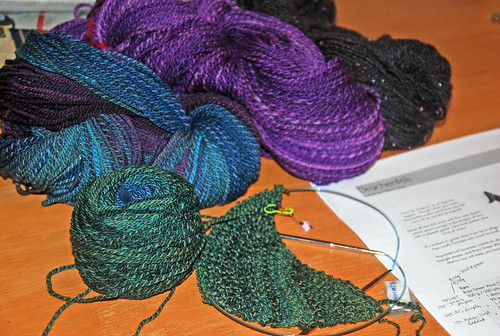 There are times when combining handspun yarns can seem like a good idea only for it to be you know, not.  My winter 2017 Drachenfels shawl has the (front-to-back) Targhee, Blue Faced Leicester & I substituted a Columbia for that beaded mohair/wool skein.  By fall 2017 it worked so well with Romney for my Starry Stripes Handspun Vest. 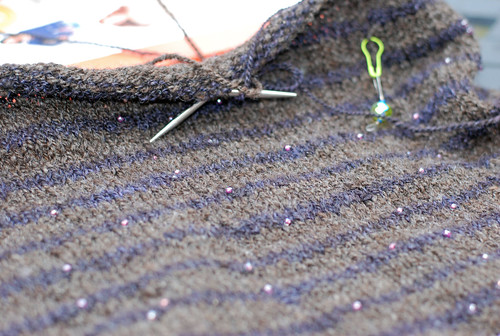 Made a great handspun vest

The details are not important.  This time, I already know that these Shetland yarns may never pair well for me.  That’s okay!  I am already scheming for the new skeins to be Pierogi Slipper Socks by Sarah Jordan and/or a tea cosy.  Both feet & steeped tea cry out for these warm, cheerful colours!

For now the 2 wheels are staying empty for a bit.  Not only am I still knitting the 2 handspun projects but there’s a nicely developed warp plan for Swedish lace 2-tone napkins to grace our home.

We joined hands and spent a mid-October Saturday together at the 10th annual Woodstock Fleece Festival.  These right steps answered T’s big question:

Why do you go to a spinning festival anyway? 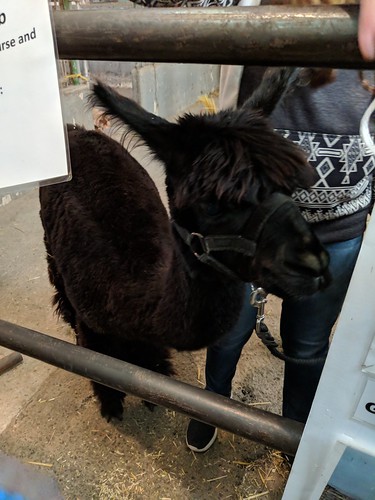 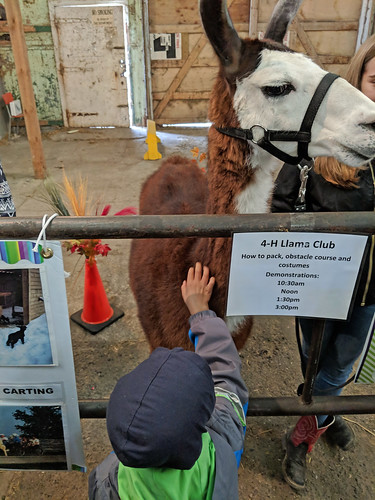 Another llama friend for T (while I shopped!)

There was enough time & space in this Festival Barn space in particular for the little ones to enjoy their experience.  The volunteers did a fabulous job! 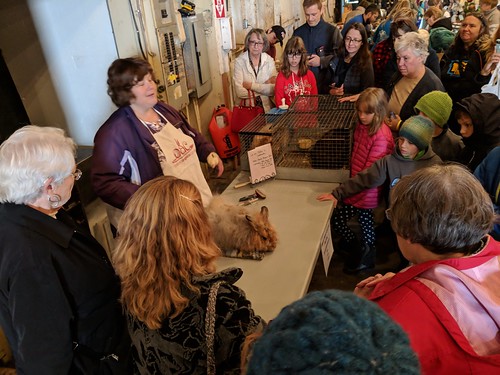 After a bite to eat we found the angora rabbit demonstration starting next door in the Marketplace Barn.  I was happy to point out kids in handknit (are they handspun too, I don’t know!) hats, rush a goodbye and head for the vendors’ stalls.

T learned a lot, snuck a pet mid-demonstration (you did?!? yes), and is not very sure about plucking fur from angora rabbits being exactly kind to them.  I demurred not being an expert.

Reason Number 2, buy all the things!

This reason covered seeing friends – vendors & attendees alike.  My purchases year-over-year are down but still not what you would call paltry. 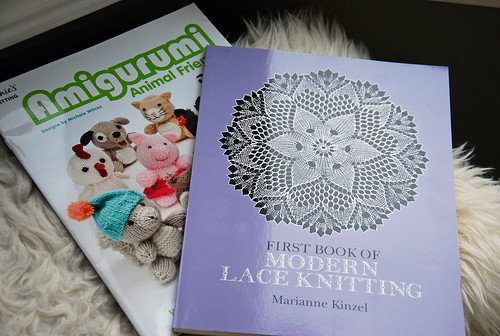 While I was in the Gemini Fibres line with a copy of Marianne Kinzel’s First Book of Modern Lace Knitting, T ran up beaming with his find & pleases.  To go with a WIP handspun monster he asks for the Michele Wilcox owl & chicken first from her Amigurumi Animal Friends.  Alrighty! 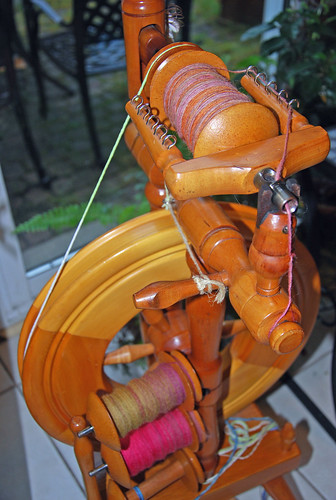 Visiting Sasha’s booth for Sheepspot was a special treat.  So impressive was it all that T asked if she owned & operated the Auditorium!  We had nice chats through the day, and I brought home this Shetland top (104 g, ‘Autumn Wedding’ colourway) with other fibre & yarn.  They are the only local sellers of Greensleeves spindles if you are looking for good ones.

This braid was handled exactly as I did the Furiosa Shetland top, i.e. divided by length into thirds, and spun end-to-end.  My guess is that they will show how different the same spinning can look where the only variable is the dyer’s colourways.  Tools, breed, and ply structure will be all the same.  It will be interesting to compare them! 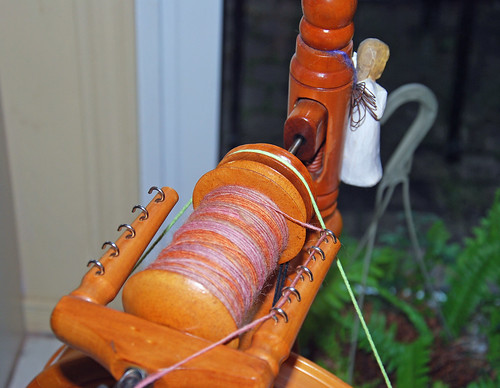 The wheel is Wee Peggy, and I didn’t change her set-up, scotch tension, 5:1.  It is a 1982 (i.e. late version) Rappard kit wheel that my friend Margaret bought, and sold to me for a first wheel.  Mary Knox has given a timeline comparison of the Peggy wheel designs here.

Since this wheel has been home, I have spun with the Willow Tree figure on the back maiden.  She holds a conch shell to her ear, and if she’s here for luck it’s been working!

As for other purchases most were re-stocking, and I also got dyestuff from John at the Fibre Garden.  Hopefully it all spills into TKK as we go through to the next Festival.

An interesting new-to-me vendor was Karberry Farm from Mountain, On.  Their Shetland was tempting but I chose 2 colours of Jacob roving (raised by a neighbouring shepherd).  Jacob is listed as critical in the Breed Conservation List 2015 of Heritage Livestock Canada.  It was a joy to see a 1-30 animal category rare breed at Woodstock!  I was in danger of grabbing the bag of raw fleece but am glad that I resisted.  Cleaning fleece as I do in the kitchen is more difficult to arrange, and I don’t like keeping wool raw if I can help it.

A quick update is that Melvin has been stable through the summer & fall on his new regimen for feline diabetes. 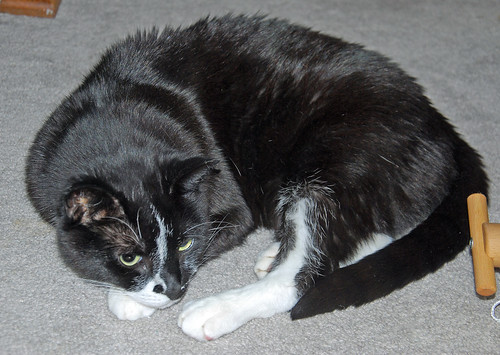 Our Mel at rest

Here he is to my right as I typed this morning (the Erica loom is beside him in the picture).  Apart from being mighty vocal on the dot of his feeding times, our Melly cat is doing pretty well, and regaining weight that he lost rapidly in the spring.  We will be doing a new blood curve shortly to find out more.

Melvin is still our only pet, and I have been feeling a tug towards adding another to the home.  It’s open-ended but we all agree.